Downingtown Bridge project at a standstill 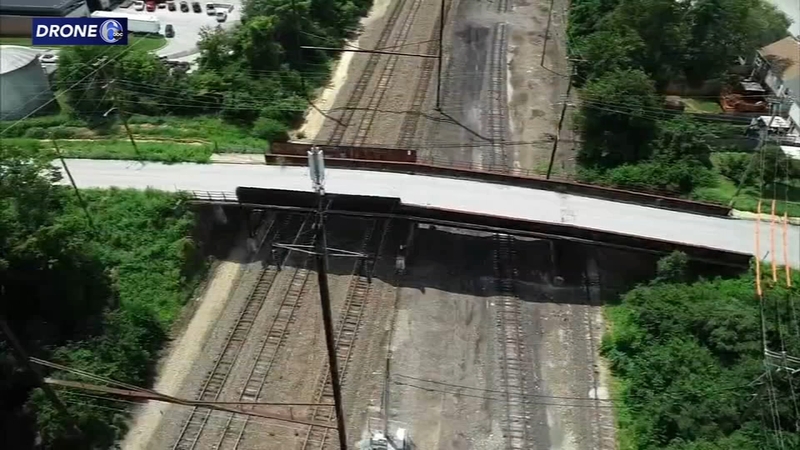 Downingtown Bridge project at a standstill

DOWNINGTOWN, Pennsylvania (WPVI) -- Backed up traffic along Brandywine Avenue in Downingtown, Chester County is becoming an all-too familiar scene and a major headache for people who live and travel in the area.

Commuter Matt Kulp of Pottstown knows how it will play out each day.

Borough Councilman Phil Dague said many people blame the congestion on the closure of nearby Chestnut Street Bridge, originally built in the 1920s.

"The alternative routes have become extra clogged. Down the street on Brandywine Avenue, it could take you 20 minutes to a half-hour just to go a couple of blocks," said Dague.

"At lunchtime, it hurts a little bit because people can't go around. It takes too much time especially on 322 at lunchtime, you can't even go through it," said Cataldo.

Chestnut Street bridge closed in January and was slated to be replaced, because of aging and structural problems.

Borough Manager Steve Sullins told Action News all the T's are crossed and the I's are dotted to replace it, but said the big hold up is Amtrak. The trains run right under the bridge.

"I have heard it is a two-day job. Two days. So almost $6-million is being held up for two days," Sullins said.

Sullins said Amtrak needs to do some electrical work to make replacing the bridge safe, but said the national rail operator has gone silent. For now, the project is at a standstill. There is no start date or completion date.

"Initially we heard a year and then it got to be 19 months and now with the extra six months of non-activity on it, I mean who knows, that is what the scary part is," Dague said.

Amtrak has been working closely with the Borough of Downingtown to progress this bridge project and has issued a permit to the Borough's contractor to begin the work. Before the work can begin, all existing utilities, such as electricity and communications, must be relocated and temporary grade crossings must be installed. Amtrak continues to coordinate with our partners to advance the completion of this infrastructure project.
Report a correction or typo
Related topics:
trafficdowningtown boroughpa. newsamtrakconstructionbridgetraffic
Copyright © 2022 WPVI-TV. All Rights Reserved.
TOP STORIES
Officials ID 5 killed in Pottstown explosion; most were children
AccuWeather Alert: Drenching Downpours Tonight
Official admits police made 'wrong decision' in TX shooting
Dann Cuellar retires after 34 years at Action News
Chickie's & Pete's to pay tolls for some drivers on AC Expressway
Bank employees help kidnapped woman after she asks for loan
Massacre survivor says gunman told them: 'You're all gonna die'
Show More
4th grader 'did what she had to to survive' Uvalde shooting, aunt says
North Penn holds farewell parade for retiring superintendent
NJ students stage walkout to honor victims killed in Texas
NRA meets in Texas after school massacre, with Trump to speak
Traveling this Memorial Day weekend? Get ready to pay more
More TOP STORIES News