Fmr. Allentown mayor sentenced to 15 years in prison for corruption 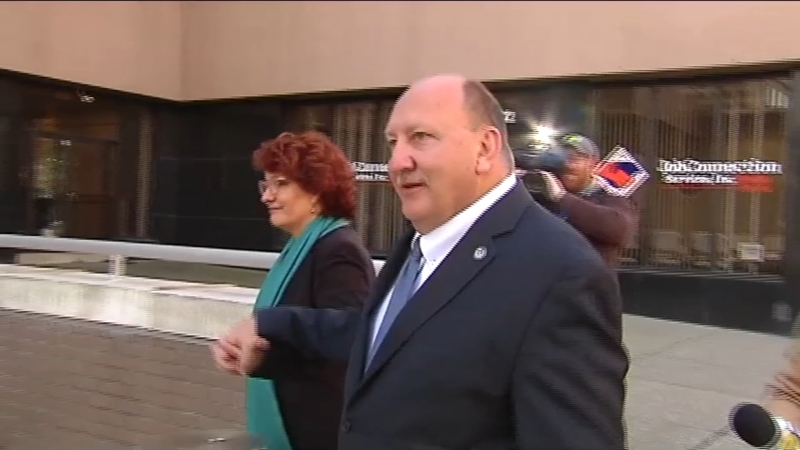 ALLENTOWN, Pa. (WPVI) -- The former mayor of Pennsylvania's third-largest city was sentenced Tuesday to 15 years in prison for rigging municipal contracts in a scheme to raise money for his political campaigns for higher office.

Ed Pawlowski, 53, was convicted in March of dozens of federal charges, including conspiracy, bribery, fraud, attempted extortion and lying to the FBI.

A jury found that Pawlowski coerced Allentown city vendors to contribute to his failed campaigns for governor and U.S. Senate, orchestrating a scheme to rig contracts for legal, engineering, technology and construction work.

"The citizens of Allentown have been waiting a long time for this day to come," Deputy U.S. Attorney Louis Lappen said on the courthouse steps. "He sold the mayor's office to the highest bidder. If you wanted to do business with the city of Allentown, you needed to line the pockets of this mayor with campaign contributions."

Pawlowski denied wrongdoing and has vowed to appeal his conviction.

Fmr. Allentown mayor sentenced to 15 years in prison for corruption. Walter Perez reports during Action News at 6pm on October 23, 2018.

The former mayor asked Judge Juan Sanchez for mercy and leniency Tuesday but did not apologize for his crimes.

"I worked hard, night and day, to try to bring this city back," he declared.

"I didn't sense any, any remorse, no apologies, no contrition despite the fact there was overwhelming evidence in this case he masterminded a pay-to-play scheme," Sanchez said. "He thought he was above the law and he chose to abuse the trust of his constituents."

After sentencing, Pawlowski was handcuffed and taken from the courtroom. His lawyer called the sentence "simply cruel" and "outrageous."

But prosecutors said Pawlowski "thirsted after" statewide or national office, writing in a sentencing memo that he "put his private interest ... ahead of the public's interest in good government."

After failing to raise enough money to mount a credible run for governor in 2013, Pawlowski became convinced he needed to quickly raise $1 million for his 2015 Senate campaign "to show national Democrats that he was a serious candidate and to scare other potential candidates out of the race," prosecutors wrote.

The government sought a sentence of nearly 13 to more than 15 years in prison.

"These are serious offenses, motivated by ambition and status and power," Assistant U.S. Attorney Anthony Wzorek told the judge.

Forty-six character witnesses, including Pawlowski's wife and daughter, testified on his behalf, saying he'd been a successful mayor who brought hundreds of millions of dollars of investment to the city of 120,000, extended a welcome to Hispanic, African and Syrian immigrants, and cared deeply for the poor.

They portrayed him as a humble, religious man motivated by service to others.

"Ed has selflessly taken care of this city and brought it back from a state that was awful to something that's thriving now," said one witness, Kelly Planer, a video producer and copywriter.

His lawyer, Jack McMahon, said Pawlowski's schemes weren't meant to "line his own pockets," but to help him "bring his skills and talents to a higher and broader base."

"This is a good man," McMahon said.

Pawlowski, who won re-election in November while under indictment, resigned two months into a fourth mayoral term.