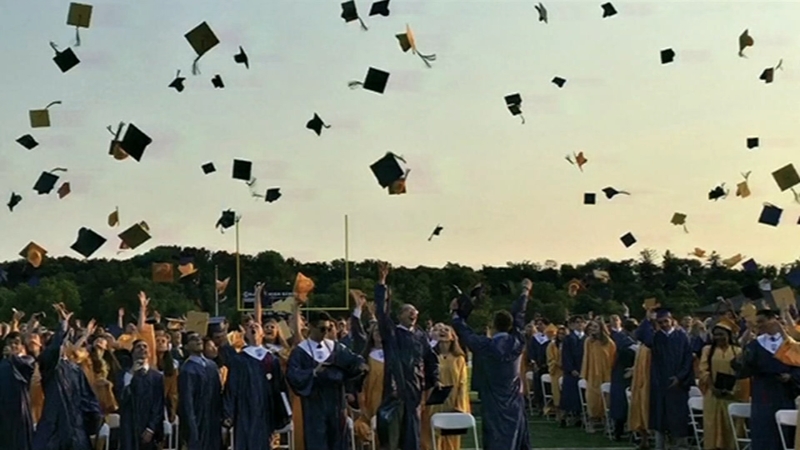 WEST CHESTER, Pa. (WPVI) -- This will be the last year you'll see the blue and gold caps and gowns during a Rustin High School graduation.

In 2020 the school is opting for a single, gender-neutral color design. In fact, all three West Chester School District high schools will make the switch.

Superintendent Jim Scanlon says the switch should have happened years ago.

"I think we should have done this 25 years ago," said Scanlon. "We have a gown for boys and gown for girls but we only have one diploma."

Scanlon says parents were notified last week of the details and he hopes everyone is on board.

"I think it's the right thing to do and I think it's symbolic of how school districts will be operating today," he said.

However, there are quite a few people who say the decision not only breaks years of tradition but caves to the pressure of a more politically correct culture.

In fact, there's a petition that's been started online with regards to Rustin High School and more than a thousand supporters who want the decision to be overturned have signed.

Some of the comments are as follows:

"Tired of others wants being jammed down our throats because they are or may be offended."

Another reads, "We shouldn't let the one percent in the schools dictate what happens and tarnish traditions."

One of her focuses is on gender identity issues.

She believes this is the right decision, more good than bad.

"It shows acceptance by their community and peers, inclusion," she said. "I think it'll go a long way just for their own sense of identity and self-respect."

Though there are clearly two sides to the debate.

"Men and women aren't the same. We can work and do the same jobs, don't get me wrong, but when you look at it we weren't built or made the same," said Stacey Watkins-Eubanks.

Kathryn Tedesco said she thinks it is great as gender equality is incredibly important.

"I think we shouldn't be differentiating based on gender," she said.

Students within the district have mixed reviews as well.

"I certainly understand the standpoint of the group of kids that like it to be one color but I think what about the 200-300 kids that don't want that color?" said Rustin High School student Jason Anthony Rankin.

However, student John Crowe likes the idea of keeping with tradition.

"Ever since the school was founded, we've had two different gowns," he said.

The superintendent said the district recently polled the outgoing seniors and the majority of them chose to have only one color.