Man and dog rescued from icy pond in West Chester 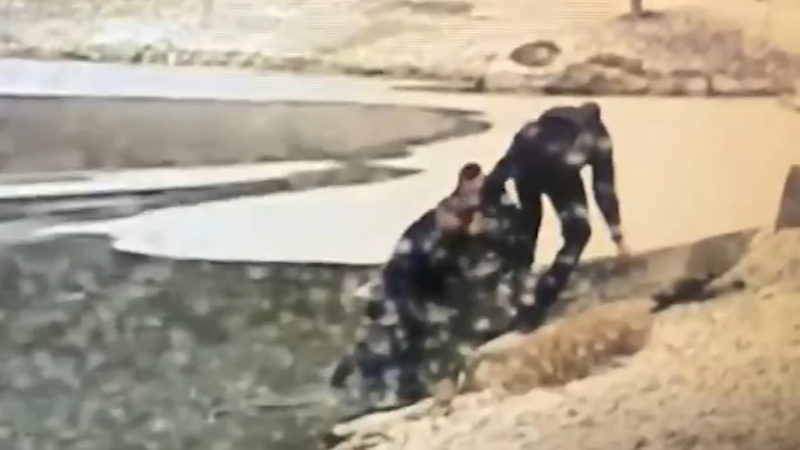 Man and dog rescued from icy pond in West Chester

EAST BRADFORD TWP., Pa. (WPVI) -- Chester County authorities rescued a man and his dog after the pair fell through the ice on a pond.

It's a question you have to ask yourself: What do you do when your dog suddenly chases after geese in a frozen pond and falls in due to the dangerously thin ice?

Sixty-year-old Dave Werkiser of East Bradford Township didn't waste a second and went in to try and save him and nearly lost his life.

"I thought that if I went in, I could stand and hold him up but I saw I was in over my head. I had a moment of fear," he said.

West Chester Police Officer Carl McIntyre was one of the first responding officers.

Fortunately, the property owner in the 800 block of West Strasburg Road in East Bradford had a boat in the shed.

McIntyre used it to get to Werkiser.

"I believe he was at the point where he was losing the ability for strong body movements for self-rescue. And he said you're not gonna rescue me before you save my dog, so I wasn't gonna argue with him, I saved the dog," said Officer McIntyre.

McIntyre continued, "I grabbed the dog sort of pulled the dog out, but the dog panicked and unfortunately the dog pushed him under the water."

"And then I realized I was in trouble," said Werkiser.

"We got the dog up out of the way and fortunately as the man was sinking, he had a good effort to get himself back to the surface and then we were able to hold on to him," said Officer McIntyre.

Finally, they were able to get him back to shore, cold but alive.

Werkiser added, "It's not a joke, I mean if nobody had been there, I'm sure we both would've drowned because there's no way we would've gotten out."

Fortunately, both Werkiser and his dog Eli are okay and extremely grateful. He says the officers saved their lives for sure.

For the officers, it was just another day at the office.
------
Send a News Tip to Action News