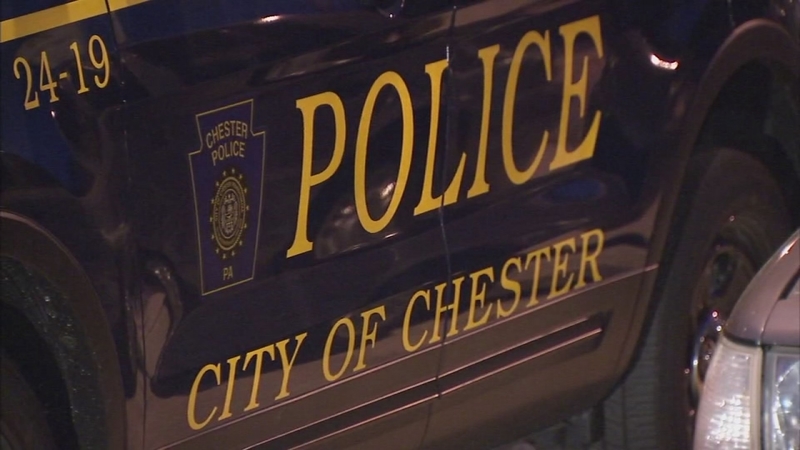 CHESTER, Pa. (WPVI) -- More police layoffs are possible in Chester, Delaware County, one of the most dangerous cities in the tri-state area.

City officials are requiring every police officer to attend one of two meetings over the next two days at city hall.

The meetings are to discuss, among other things, contract negotiations, the city's financial problems and possible layoffs as a result.

Both police and residents will tell you that layoffs would not bode well in this crime plagued city.

Wellington Heights is a relatively new housing development in the city of Chester. But upon closer inspection, residents here point to bullet holes on the fences, on people's sheds and even some homes.

Resident Denise Robinson said, "You got people's cars getting hit, people's tires getting shot out. I mean, people scared, we used to sit outside."

On Saturday night, one of those bullets went through a home and struck 51-year-old Erica Smack who was visiting a friend. She's hospitalized with a punctured lung and cracked rib.

Her son, Dion Smack said, "Way out of hand. It's a shame. You can't even enjoy your own neighborhood. And you can't come out your house. It's even hard to be inside your house. You can still get hit with a stray bullet."

At a time when Chester's dubious reputation as one of the nation's most dangerous cities doesn't seem to be getting any better, the city's police force has shrunk.

Randy Bothwell, FOP President of Lodge 19 said, "We had a mass leaving last year. Twenty officers left. I was one of them due to contract issues."

Police have been working without a contract since December of last year. And while the city has not confirmed it, there is word there could be layoffs due to the city's serious financial problems.

One thing that is certain for residents is they have a serious crime problem.

Resident Kenneth Curry said, "Something's gotta be done, and laying off police is not the answer."

Robinson added, "Why would you lay officers off? Why? And then you sit and tell us the budget. We don't have enough money."

Calls to the mayor's press secretary were not returned.

The first is set for Tuesday afternoon.