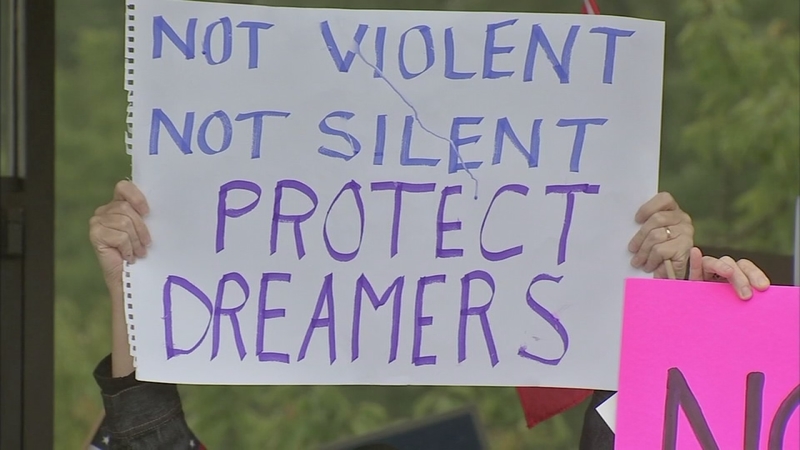 President Trump gave Congress six months to resolve the status of young immigrants living in the country illegally, who were given protections under the Deferred Action for Childhood Arrivals program.

There were protests, and a few arrests, outside the local offices of several members of Congress from the Delaware Valley, primarily Republican lawmakers.

Among them was Yeni Romero of Reading, Pa. Her family moved to Berks County from El Salvador when she was six, and she is now working toward her degree in health care administration.

Yeni says the first time she ever felt like a foreigner was on Tuesday.

"I consider myself an American and every one of the DACA people I know consider themselves to be an American too. They grew up here," she said.

Congressman Costello released a response to DACA's repeal, reading in part,"While it is clear the Obama Administration abused executive authority in implementing DACA, it is now up to Congress to pass legislation to give these individuals clear standards as to how they may remain domiciled in the United States."

A few protesters also gathered outside Congressman Charlie Dent's office in South Whitehall Township. Here we found another DACA beneficiary named Armando Jimenez, who moved here with his family from Mexico when he was two.

Jimenez says the worst part of DACA's repeal is the message it sends from the White House.

"This was to make his base happy, and this is a base that fears immigrants, that fears others, and tries to blame us for the country's problems," he said.

Several of these rallies were organized by a grassroots organization called Make the Road Pennsylvania, which is now dedicating its resources to challenging the repeal of DACA.

"We're out here today because the announcement yesterday was devastating for 800,000 immigrant youth across the country who have earned status, and we have to let congresspeople know they have to either stand up and denounce what happened," said Adan Jesus Marin, "or we'll be giving them hell for as long as it takes."

The handful of people who were arrested were charged with trespassing. They have since been processed and released.