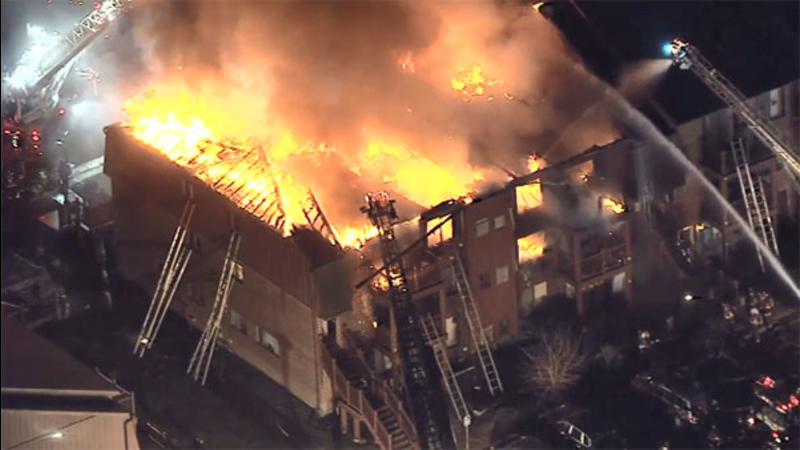 Chopper 6HD captured the intense flames in Brookhaven on the 5200 block of Hilltop Drive shortly before 6 p.m.

First responders went door to door in the three-story building to alert residents to the impending danger.

"I ran into the building and started clearing rooms with the officers to make sure no one was in the building," said resident Joe Nolan.

There were neighbors helping neighbors, with some opening their doors to bring residents who were displaced by the fire out of the cold.

The response from nearby fire companies was massive. The fire wiped out most of Building C, and according to officials at the time of the fire all 18 units were occupied.

Brookhaven Assistant Fire Chief Charles Leslie said the cold conditions did not help. However, he said everyone is accounted for and luckily there are no injuries.

No injuries, everyone accounted for in #brookhaven condo fire. Family of 3 rescued @6abc pic.twitter.com/vNgTQPY9uf

He described the rescue of a family of three from the burning building.

"They were all brought down a ladder from a third-floor balcony," said Leslie. "No one got hurt."

Approximately 100 people received assistance from the Red Cross at nearby borough hall.

Red Paw Relief Team said they are helping pets that have been displaced.

There is no word on what might have sparked the blaze.