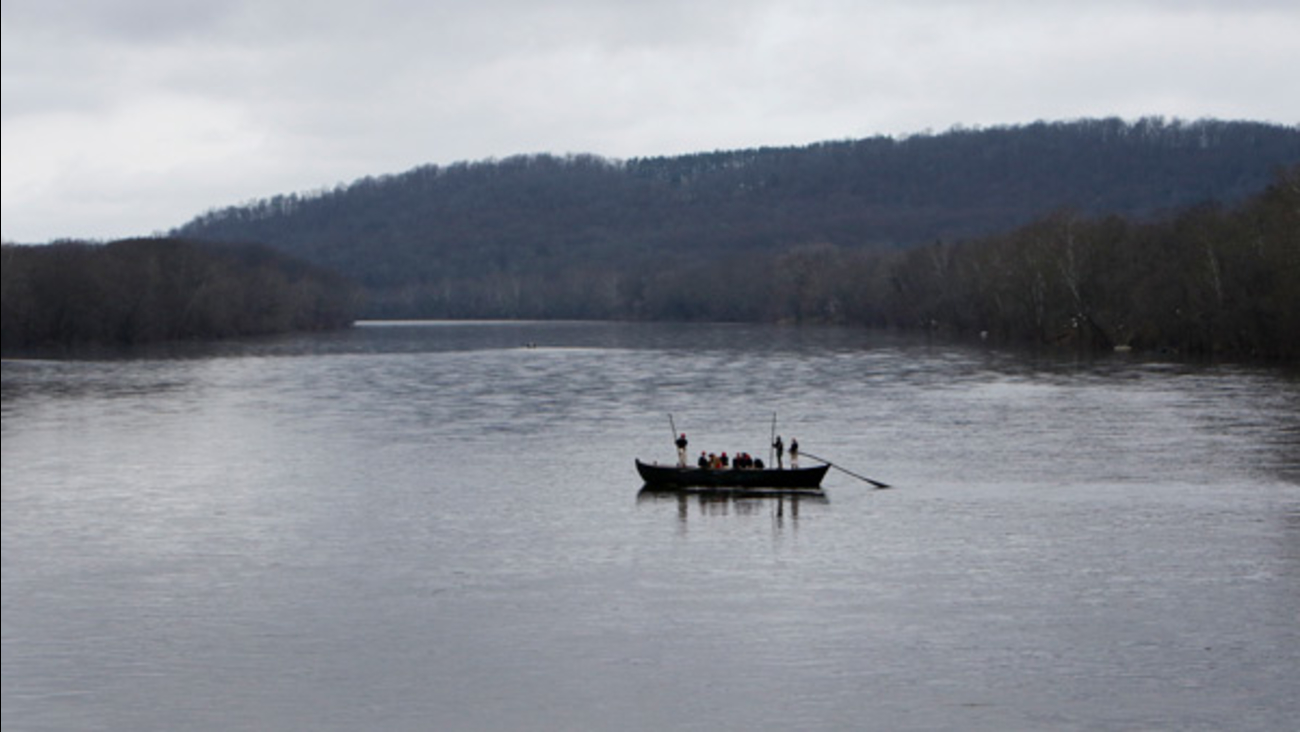 In this Dec. 25, 2015 photo, a group of Revolutionary War re-enactors row a Durham boat during the re-enactment of Washington crossing the Delaware River, in Washington Crossing. (AP Photo/ Joseph Kaczmarek, File)

WASHINGTON CROSSING, Pa. -- Despite the best efforts of some Philadelphia schoolchildren, Mother Nature blew in and scuttled the annual re-enactment of George Washington's crossing of the Delaware River during the Revolutionary War.

Organizers said high winds forced them to cancel Monday's planned crossing, the highlight of a historical re-enactment that draws thousands of people to the banks of the river in Washington Crossing, Pennsylvania, and Titusville, New Jersey.

"We were advised by the (marine patrol) out in the boats that they didn't think it was safe to cross," said Andy Smith, spokesman for Friends of Washington Crossing Park.

The National Weather Service said winds had been gusting to 45 or 50 mph or even a bit more in southeastern Pennsylvania and New Jersey. The winds could have been even stronger on the water with a lack of trees and a channeling effect, meteorologist Chad Shafer said.

"Re-enactors are always disappointed when they can't cross, but safety is always the most important thing," Smith said by phone as a fife and drum played in the background. "We don't want to put anyone in danger out on the water."

Other activities went on as scheduled, including Washington's rallying of his troops, historical speeches and processions.

Originally, it was low water that had posed a threat to the annual re-enactment in wooden Durham boats. But Philadelphia Waterborne, a nonprofit that teaches boat-building skills to middle- and high-school students, came through with six handmade, 12-foot rowboats that could have made it across.

Organizers noted that there was historical authenticity to this year's planned change; while Durham boats were used in the original 1776 crossing, historians agree that Washington probably used various river craft to make his daring crossing that turned the tide of the Revolutionary War.

Boats ferried 2,400 soldiers, 200 horses and 18 cannons across the river during the original crossing. Washington's troops marched eight miles downriver before battling Hessian mercenaries in the streets of Trenton. Thirty Hessians were killed, and two Continental soldiers froze to death on the march.