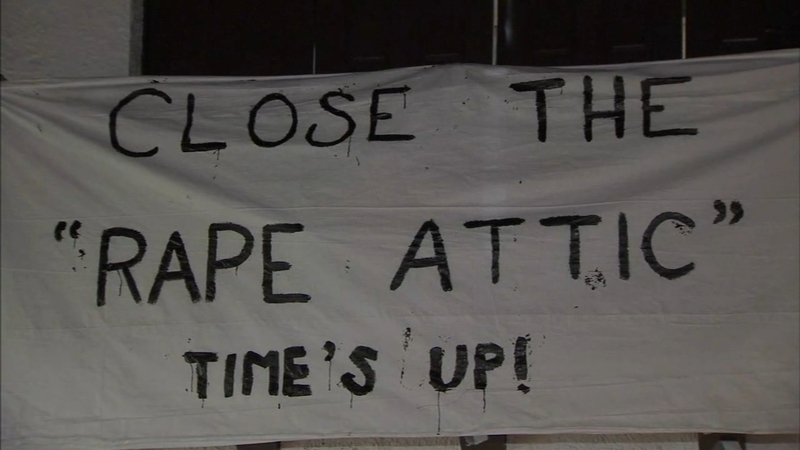 SWARTHMORE, Pa. (WPVI) -- Protesters continued to occupy a fraternity house on the campus of Swarthmore College. The sit-in by scores of students began Saturday. The house is normally used by the 59 member Phi Psi Fraternity.

A spokesperson for the protesters say they want the college to no longer lease space to either of the Swarthmore's two fraternities, Phi Psi and Delta Upsilon.

Myra Henry, a protester and member of Organizing for Survivors, says the college should cut ties with the Greek Letter organizations because fraternities "are a space of violence and exclusion."

"This house is ours, read another.

The protest comes in the wake of documents published by the campus newspaper the "Phoenix". The material is described as leaked documents from Phi Psi dubbed "minutes" that appears to be created in 2013 and 14.

Saturday the college announced that all fraternity activities have been suspended as the published material is investigated.

Swarthmore administrators have condemned the language in the documents as vulgar, sexist, violent, homophobic and racist. However the college also says the authenticity has not yet been verified.

On its Facebook page, Phi Psi repudiated the language, adding its current members were not in college at the time the material was reportedly written. In a statement it said current members would not have joined such an organization. It continued saying "Today Phi Psi is proud to be an open and safe social space for anyone in the community."

The protesters vow they will continue their sit-in until Swarthmore cuts all ties with the fraternities.
Report a correction or typo
Related topics:
educationpennsylvania newsprotest
Copyright © 2021 WPVI-TV. All Rights Reserved.
More Videos
From CNN Newsource affiliates
TOP STORIES