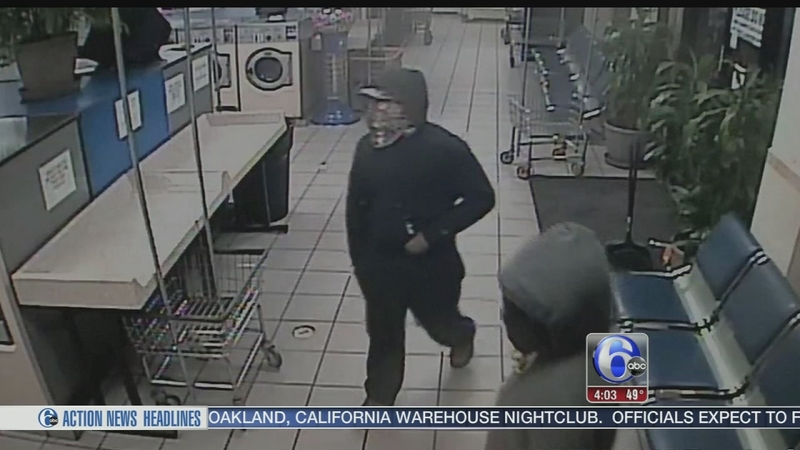 UPPER DARBY, Pa. (WPVI) -- A woman was terrorized inside an Upper Darby laundromat early Monday morning in an incident that was captured on surveillance video.

It happened inside the T&W laundromat along the 7100 block of Marshall Road.

Detectives say the 39-year-old female employee was cleaning when two people wearing ski masks burst in and held her up at gunpoint.

"How they didn't kill that lady is beyond me. She's a very lucky lady," said Upper Darby Police Superintendent Michael Chitwood.

The victim is knocked to the ground a gun is jammed into her side. The video shows the victim being taken back into a boiler room, where her shoes are stripped and she's held down by the suspect with the gun.

The cops say the message from the suspect was "if you say anything, we'll kill you."

Meanwhile, video shows the gunman's accomplice, believed to be a woman, going into the office.

But before she gets away, she spills quarters all over the floor and takes her gloves off to pick them up.

Chitwood is hopeful for fingerprints.

"There's a lot of chances to do good old-fashioned police work," he said.

Customers here are sickened by the video.

"She's real nice. I didn't think anyone could do that to her," said Destiny Harris.

Chitwood says there's only one way to describe the suspects.

"Urban terrorists come in, they got ski masks on. Some type of camouflage," he said.

The victim is shaken but was not physically hurt.