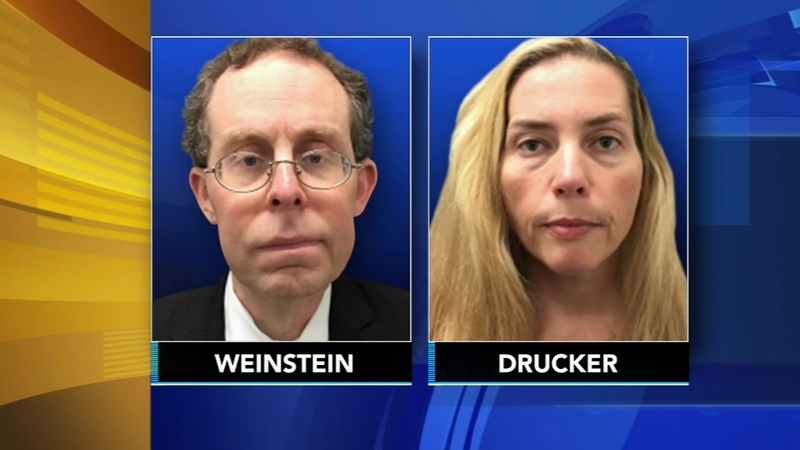 NORTHAMPTON TWP., Pennsylvania (WPVI) -- A former Northampton Township supervisor and his girlfriend, who were charged with scheming to incapacitate women with alcohol and then take sexually explicit photos without consent, have pleaded guilty on Monday.

According to court documents, it was an old cell phone Kelly Drucker had given her daughter that had dozens of naked photos, videos and a thread of text messages between her and her boyfriend, Larry Weinstein, that detailed their criminal behavior.

Court records reveal what the pair referred to as their "mission" was hatched in November of 2017.

The documents said it was in a thread of text messages that Weinstein instructed Drucker to have dinner with the victim, mix a drink with "wine and Everclear" and "not let her go to the bathroom until she gets back to her place," even texting "can't wait until so drunk and gets naked."

"They had no regard for whether she was going to be knocked out, be unconscious be sober or worse," said Bucks County District Attorney Matt Weintraub in a press conference last year.

Once back at Drucker's residence, the victim, now passed out in a bathroom is allegedly photographed with spy glasses.

In a separate incident, court records show Weinstein took a selfie with a second victim, who appeared to be unconscious in bed. Her shirt was pulled up and her shorts pulled down in the photo.

The pair were charged and turned themselves into Bucks County detectives in October of last year.

Their trial was scheduled to start Monday, but both defendants plead guilty to multiple charges in court

On Monday, Weinstein pleaded guilty to possessing devices to intercept communications, criminal use of a communication facility, false imprisonment, invasion of privacy and recklessly endangering another person. He also entered a plea of no contest to invading the
privacy of a victim unrelated to the 2017 offenses.