In election fraud quest, GOP in Pennsylvania seeks details on who voted

Democrats have sharply criticized the effort, saying the Republicans' "sham audit" or "fraudit" is a stunt.
AP
By MARC LEVY Associated Press 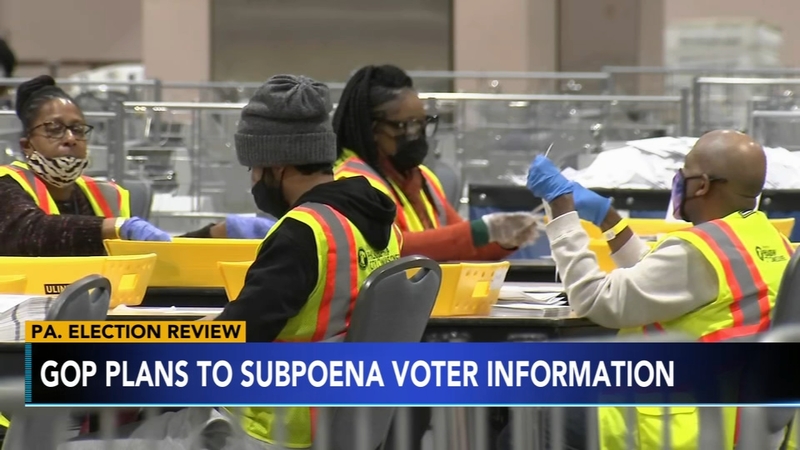 In election fraud quest, GOP seeks details on who voted

HARRISBURG, Pennsylvania -- Republicans in Pennsylvania's Senate pursuing what they call a "forensic investigation" of last year's presidential election said Tuesday they plan to subpoena records that detail who voted, including their driver's license number and the last four digits of their Social Security number, and whether they voted by mail or in-person.

Senate Republicans have scheduled a meeting Wednesday of the Senate Intergovernmental Operations Committee, which they control, to vote to issue subpoenas for the information from Gov. Tom Wolf's administration.

The request for records on who voted will include their name, address, driver's license number, the last four digits of their Social Security number and how they voted, whether in-person, by mail, absentee or provisional ballot.

Republicans also want that information for each registered voter, as of Nov. 1, 2020, plus the last time they voted. In addition to that, Republicans say they plan to issue subpoenas for records of communication between Wolf's administration and counties concerning elections from May 1, 2020, through May 1, 2021.

The idea of a "forensic investigation" or "audit" has been propelled by former President Donald Trump's most ardent supporters in battleground states where he lost. Critics say it is a fruitless search for fraud to legitimize Trump's baseless conspiracy theories that the election was rigged against him.

Democrats have vowed to fight any subpoenas, possibly in court, and it's not clear whether Wolf's administration can be forced to produce information, even by court order.
It also is not clear whether Wolf, a Democrat, will cooperate or whether the Department of State - which oversees the counties' administration of elections - stores that information.
Wolf's office said Tuesday that it will need to review the details of any subpoenas "before determining how to respond."

Democrats have sharply criticized the effort, saying the Republicans' "sham audit" or "fraudit" is a stunt to erode the legitimacy of President Joe Biden's victory and an extension of a national campaign to attack voting rights. Biden beat Trump in Pennsylvania by more than 80,000 votes, according to certified results.