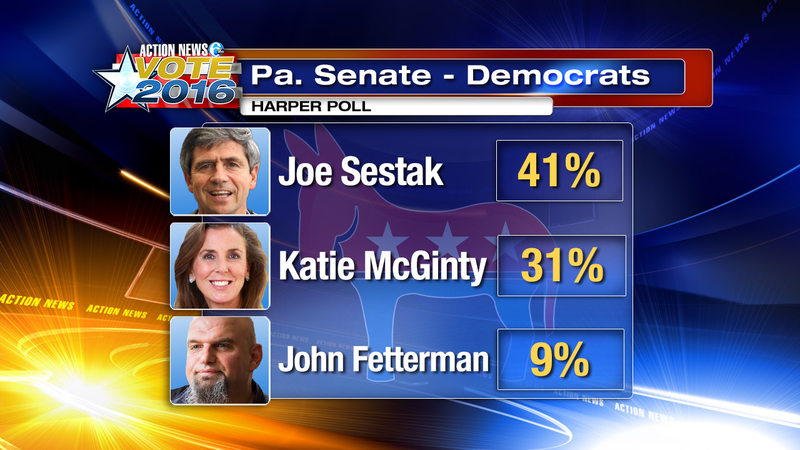 MEDIA, Pa. (WPVI) -- In Pennsylvania, there's just one week to go for the three Democrats vying for a seat in the US Senate.

Action News was there as former congressman Joe Sestak canvassed in Media, Delaware County, part of his former district.

He is campaigning hard for the Democratic nomination hoping once again to confront GOP incumbent Senator Pat Toomey.

He is still a pariah to Democratic Party bosses. He's a pro-Obama progressive and 100% pro-labor. But the former admiral refuses to take his marching orders from party bosses like New York senator Chuck Shumer who will be taking over Democratic Party leadership in the Senate.

"A US Senator, soon to maybe be the top one, says, 'Sestak, whenever I tell you anything, the only answer is to be yes.' This is no longer a nation of kings and kingmakers," Sestak said.

Katie McGinty has never held elective office, but she is the choice of the Democratic establishment. The unions have poured in money. President Obama is on board and so is Governor Tom Wolf. She honed her message to hammer GOP incumbent Pat Toomey.

"Pat Toomey's voting record, tried to privatize social security, voting against healthcare, aiming to repeal the Medicaid expansion that we worked so hard on, voting against veterans' benefits and veterans' programs," McGinty said.

John Fetterman, the 11-year mayor of Braddock, Pa., fights hard to rejuvenate his rusted out steel belt town out west. He has endorsed Bernie Sanders for president as he travels the commonwealth pushing an agenda of income equality and legalizing marijuana.

"People are just turned off by this idea that millionaires and outside groups can just dump virtually unlimited funds in and completely skew a race that was otherwise heading into a very specific direction," Fetterman said.

The latest Democratic primary polling shows Sestak with a 10% lead over McGinty, 41% to 31%, with Fetterman way back at 9%.

There are not many glaring policy differences between these three would-be senators so the winner will be determined by who can can generate the most voter turnout in the areas where they are the strongest.