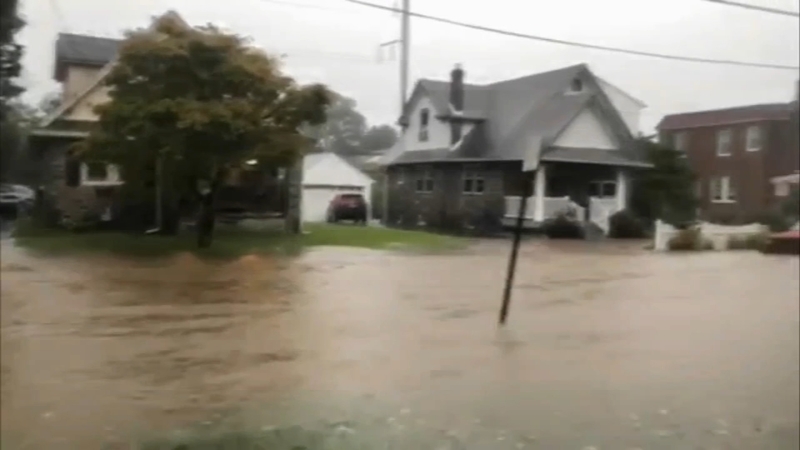 BROOMALL, Pennsylvania (WPVI) -- Jim Ryan, the manager at Springfield Swim Club, says his employees have their work cut for them.

These pictures tell the story and captured the damage.

The parking lot is flooded and the pool is almost unrecognizable.

"Last year it took a week. This year we hope to be as fast as possible. We really won't know until the pool is drained how much mud is in the bottom of the pool and how long it takes us to get it out," said Ryan.

Chopper 6 gave a bird's eye of how heavy rainfall flooded nearby creeks and turned the once picturesque pool area into what looks like a muddy pond. Ian Dath says his car got stuck and flooded out.

"It is definitely frustrating not to have a car for the rest of the summer. I may be walking to work," said Dath.

Swim Club employees say they will work around the clock to get the pool back open.

"The biggest part is going to be getting the mud out of the pool. We are going to have to shovel it all and power wash the pool and the pool has to be filled with water," said Dath.

In Havertown, streets were flooded and water seeped into basements causing damage.

"In the nick of time, we were able to get our two cars up the hill, said Rachel Cevera of Havertown.

"My car was underwater. I looked in the back and the creek was totally overflowed and I just tried to get everything up from the basement that I could," said Megan Pucillo of Havertown.

In Broomall, this huge sinkhole formed at the Giant Supermarket along Springfield Road and nearly swallowed a minivan; no one was inside at the time. Not too far away, an Action News viewer captured first responders rescuing a woman from rising floodwaters.

It was a rough weather day across the area.

"At first the water was about hip high and then when I came back, it was up to chest high and we have about three inches of water in our basement," said Cevera.