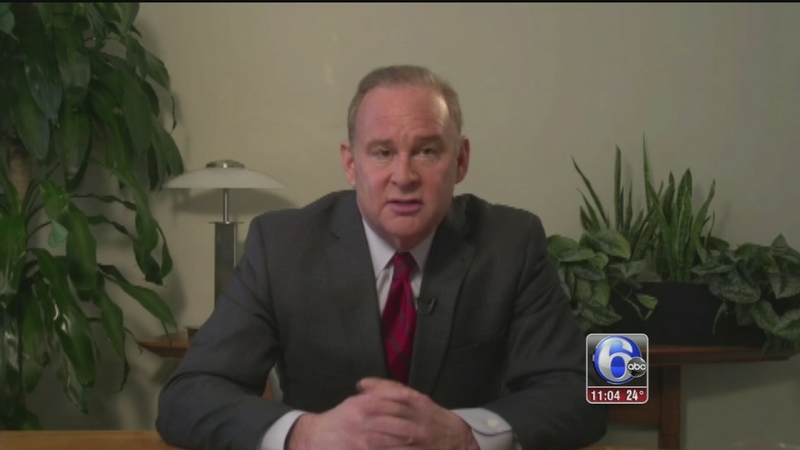 HARRISBURG, Pa. (WPVI) -- Pennsylvania State Treasurer Rob McCord announced his resignation is effective immediately and that he is planning to plead guilty to charges stemming from a federal investigation.

"I owe an apology to the people of Pennsylvania," said McCord in a videotaped statement.

Action News first caught up with McCord on Thursday night outside his home.

But on Friday afternoon, in a remorseful video statement, McCord said the mistake and fault is his alone.

He admitted to trying to take advantage of two potential political contributors who were hoping to continue doing business with the commonwealth and says he 'stepped over the line.'

"To remind them I could make things difficult for them, I essentially said that potential contributors should not risk making an enemy of the State Treasurer. Clearly that was wrong," said McCord.

McCord had serves as treasurer since 2008. He made an unsuccessful bid for the democratic nomination for Pennsylvania governor in 2014.

His lawyers says it was during that failed campaign that McCord overstepped the line of legitimate political fundraising.

"I know my improper efforts to raise campaign contributions will forever be a stain on my record. Again, I deeply regret my actions and I apologize for any harm or any embarrassment I've caused for anyone," said McCord.

McCord had originally intended to resign on February 12th but now says his resignation is effective immediately.

"I'm deeply concerned that my continuation in office, even for a day, might interfere with the operation of the office of the Treasurer. And so I am now resigning effective immediately," said McCord.

"This is a sad day for the Commonwealth of Pennsylvania and for Rob McCord's family. As elected leaders we should be stewards of democracy and we should act to protect hardworking taxpayers, not take advantage of them. This type of behavior leads to the erosion of the public's trust - it is simply unacceptable. I stand firm in my commitment to restore the public's trust in their government. Therefore, I will act as quickly as possible to present a nominee to the Senate of the highest caliber and capability."