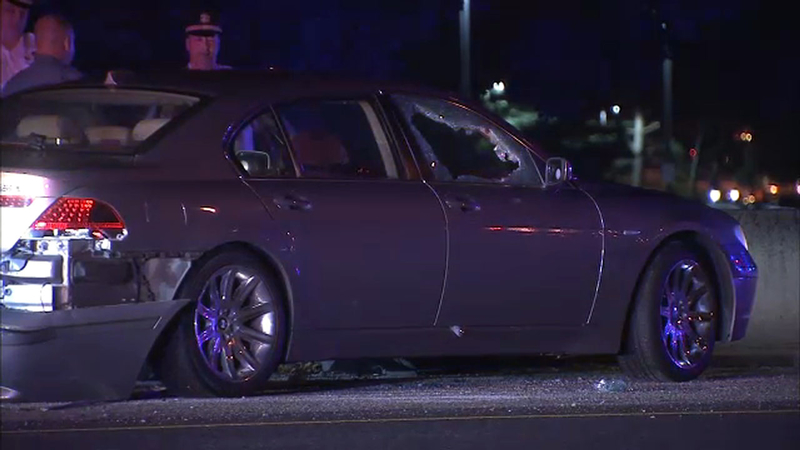 UPPER CHICHESTER TWP., Pa. (WPVI) -- A man is dead after shooting his wife in Delaware County and then leading police on a chase through Philadelphia before taking his own life.

It began around 12:20 a.m. Wednesday on the 1600 block of Meetinghouse Road in Upper Chichester Township.

Investigators say the 41-year-old suspect arrived to the home where his 40-year-old wife lived with her three kids, ages 19, 16, and 10.

The wife, police say, had a protection from abuse order against the husband and he was not supposed to be there. They got into an argument and police say her husband shot her four times.

The woman and her children were able to run to the Boothwyn Firehouse, beat on the door, and get medics to help. She was taken to the hospital for treatment. Her children were not harmed.

Soon, police located her husband parked at nearby rest stop on I-95.

Police located Upper Chichester shooting suspect at a rest stop on I-95. He fled, they pursued him. No officers fire weapons or were injured. pic.twitter.com/dBDM1C5qoI

He then led police on a chase, with multiple agencies responding.

Right before the Platt Bridge in Southwest Philadelphia, police say he struck a police car and hit a barrier.

Investigators say the suspect shot himself in the head, but it's unclear if that occurred before or after the crash. He was taken to Penn Presbyterian Medical Center where he was pronounced dead.

Investigators aren’t sure if 41 year old suspect in Upper Chichester shooting that led police on chase, shot himself before or after he crashed in Philly. pic.twitter.com/3ezaTLI6uW

Police recovered a handgun at the scene. A stray bullet also struck the home across the street; the grandmother and child who were inside that home were not hurt.