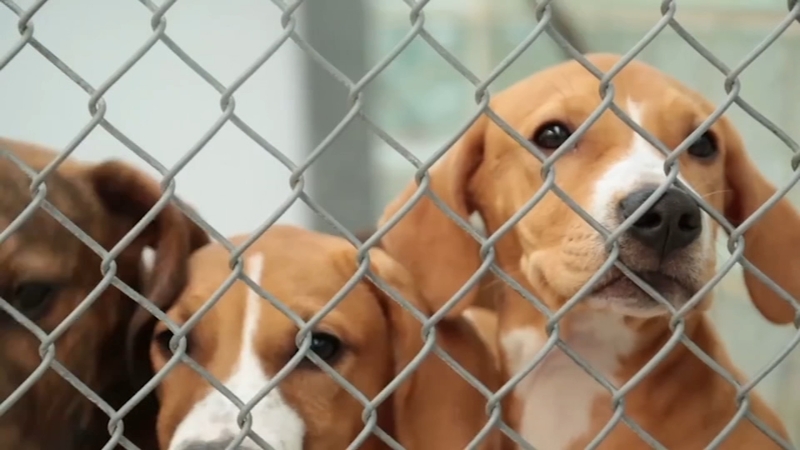 PHILADELPHIA (WPVI) -- The Pennsylvania SPCA has four adoption facilities and they provide low-cost vet services. But the humane law enforcement brand is an important part of their work.

"The reason we are doing it is because no one else is," says Nicole Wilson, the Director of Humane Law Enforcement for the Pennsylvania SPCA.

The SPCA covers 23 counties and works closely with animal control.

"If animal control receives an animal that appears to be consistent with a case of abuse, they will defer those animals and send them to us," Wilson says.

The officers have seen horrible cases of abuse, but they also have amazing rescue stories.

"We had one case that we went in and actually the animal died on its way back to the shelter, I remember saying this one isn't moving. At that point she was actually declared dead - we immediately start compressions on her chest and stuck in drugs in her heart to start breathing for her," says Wilson.

That cat, named Granny Smith is now happy and healthy.

"We never know what the next day is going to bring us," says Wilson.

The officers save thousands of lives each year and their work is covered by donations.

"It's a number of small donations that continue to support the work," Wilson says.

And shelter adoptions are on the rise.

Lance is a super friendly three-year-old Pit Mix pulled from the city shelter.

"He has an exuberant energy level, but he's a really wonderful guy," says Wilson.

Muppet is a silly-faced American Bull Dog Mix that can be a little shy at first but is super sweet.

"He has some wounds on the back of his legs, might have been dragged by a car at some point. He went to the shelter hospital and recovered. He's super super sweet, and he's looking for a great home," Wilson says.

Jack Rabbit is a six-year-old mixed breed rescued from a high intake shelter.

And Callie is also from the Pennsylvania SPCA. She's two-years-old, loves people and is very chill. She would do great in any kind of home.

If you're interested in any of the animals featured in this report, you can visit the Pennsylvania SPCA website.
And, if you'd like us to share your shelter success stories, post a picture to the FYI Philly Facebook page using #6abcshelterme and tell us where you adopted your pet and how much they mean to you.
We'll be featuring your stories on upcoming Shelter Me segments.
----------
Send a breaking news alert
Report a correction or typo
Learn more about the 6abc apps
Related topics:
pets & animalsdogscatshorsesanimal newspetsshelter me
Copyright © 2021 WPVI-TV. All Rights Reserved.
TOP STORIES
Officer struck pedestrian, drove home with body: Prosecutor
Man dead after shooting at Moose Lodge in Chester Co.
What is omicron? What to know about new COVID variant
UK, Germany, Italy report cases of new omicron variant
AccuWeather: Bright and blustery Saturday
Man, 51, dies after North Philly shooting; 502nd homicide of 2021
Woman sought for Center City bank robbery
Show More
Data correction drops COVID vaccine rates in Pennsylvania
Tanker truck flips over on ramp to I-476 south in Marple Twp.
Fire burns through Kensington rowhome
Man killed by stray bullet while eating Thanksgiving dinner: DA
Holiday shipping deadlines to get packages mailed on time: LIST
More TOP STORIES News