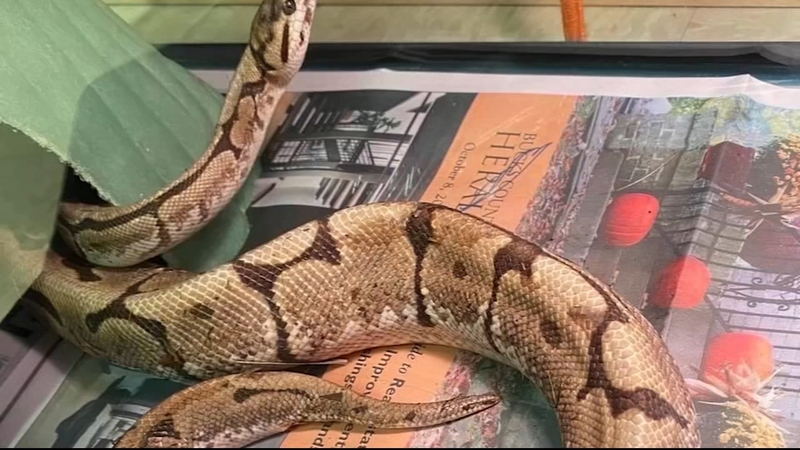 On Monday, the Reardon family made an unusual discovery in their Levittown garage.

"My mother-in-law was out here in the garage and she was sitting here and next thing you know a snake slithered up the side right here," said Mark Reardon.

They said it was pretty clear - this wasn't a garden snake.

"I just grabbed the trash can and I had a poke in my hand...and it went right into the trash can. It was no big deal," said Reardon.

"We went out to investigate and found out that it was in fact a 4 to 5-foot ball python that is not native to the area," she said.

But her unusual day wasn't over.

"I started to put it in my car and that's when I got the call about the next snake," said Keen.

This one was at the Shell gas station around the corner at Woodbourne and New Falls roads, and appeared to be dead. Then the third call came for yet another, very alive python, from another neighbor nearby. The investigation took a turn.

"There's no way three four-foot snakes all got out and nobody realizes it. So it transitioned from a stray animal call to a possible abandonment call," said Keen.

She believes the three non-venomous snakes were dumped by the same owner. One of the snakes succumbed to the chilly weather.

The two surviving pythons, which are both female, are receiving medical treatment at the Bucks County SPCA. The goal, when they are healthy again, is to find them new homes.

"They're one of the most commonly owned snakes. They're super docile and they make great pets," said Keen.

During the pandemic, Middletown Animal Control said requests for pet assistance have increased. The SPCA said surrendering an animal is always better than abandoning one.

"We will not judge. We will ask some questions to ascertain the health and background of the animal. We're just here to assist people and their pets," said Cindy Kelly with Bucks County SPCA.

Officer Keen said there's a small chance another python is out there. She said they are not a threat, and if you see one you should contact animal control.
Report a correction or typo
Related topics:
pets & animalsbucks countypetssnake
Copyright © 2021 WPVI-TV. All Rights Reserved.
More Videos
From CNN Newsource affiliates
TOP STORIES