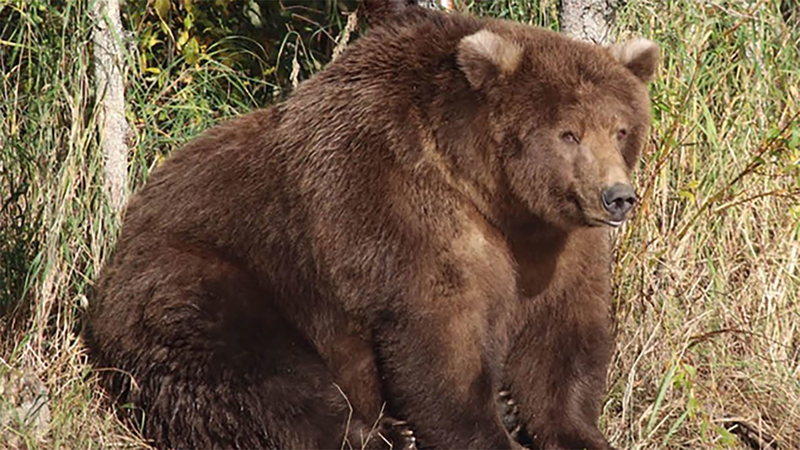 Fat Bear Week: Alaskan bears battle it out to gain weight for winter

During the fourth annual Fat Bear Week, all eyes were on the bears who live along the Brooks River at Katmai National Park & Preserve as they battle it out to gain massive amounts of weight ahead of their annual winter hibernation. Park rangers are tracking bears seen often on the explore.org Bear Cam as they eat their way toward hibernation, and they're pitting the bears against each other in March Madness-style brackets.

On Tuesday, 409 Beadnose was officially declared the fattest of the fat bears.

"What does the she win for all this hard work?" the park wrote of the winner. "Stronger chances of living through the winter."

Alaskan brown bears first began gaining weight in July. According to the National Park Service, the bears enter a medical state known as hyperphagia in which they eat non-stop and can gain up to four pounds in a single day. Some bears can eat dozens of sockeye salmon each day, with each salmon packing about 4,000 calories.

Over the course of the summer 854 Divot has certainly bulked up. A single sockeye salmon has about 4,000 calories and these bears can eat upwards of two dozen per day during peak season. #FatBearWeek pic.twitter.com/WFknlctAJO

Fattening up as winter approaches is a matter of life and death for the bears: relying on stored fat for energy, they can lose up to a third of their body fat as they hibernate. Their eventual hibernation can last between five and eight months, and most emerge from their dens by May.

At peak season, brown bears can add up to four pounds of weight a day.

Bear 409 looks like she had no trouble with that. (Yes, this is the same bear. We’re screaming.) pic.twitter.com/Wk1gSjDReX

Before the winner was crowned, park rangers said they had their money on a few select bears: 747, whose plump stomach nearly touches the ground; 435, who is tasked with feeding not only herself but also her cubs; and 480, last year's reigning champ.