Helpful beekeeper is all the buzz in Berks County 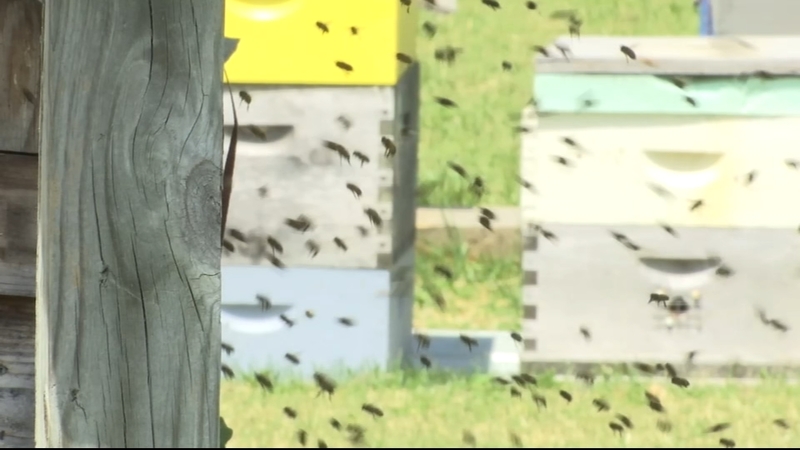 BERNVILLE, Pennsylvania (WPVI) -- The constant buzzing of a Bernville backyard would make a lot of people turn away, but for Bruce Rodriguez the buzz is music to his ears.

"I read every book I could find and watched every documentary, and I just kind of learned about them my whole life. I just love bees," said Rodriguez, who started a blog called ilovebees.buzz.

The Berks County beekeeper also cares for hundreds of colonies. Many of them are bees he's helped remove from someone else's yard.

"Right now from April to July is reproductive swarm season, so that's when all the honey bee colonies that lived over winter are becoming very overpopulated and they just want to divide," he said.

He says this is also when they're docile and not likely to sting.

"I would not come this close without protection if this were August or September, they would not tolerate that," he explained.

The bees are looking for somewhere else to live. He helps direct them.

"They're set up to bait a swarm to move into them rather than someone's home," he said.

He is saving their lives. As bee populations are decreasing worldwide, Rodriguez is preserving their habitats, like an old tree that was being chopped down. The section of the tree is now in his yard.

"This was about 50 feet up in the air on the tree," he explained.

One of the jobs Rodriguez is working on for a family is to get the bees safely out of a barrel. A hole was left unplugged so a swarm moved in and he's trying to lure them into the box above.

Once the bees move, he "can take the barrel back to the people."