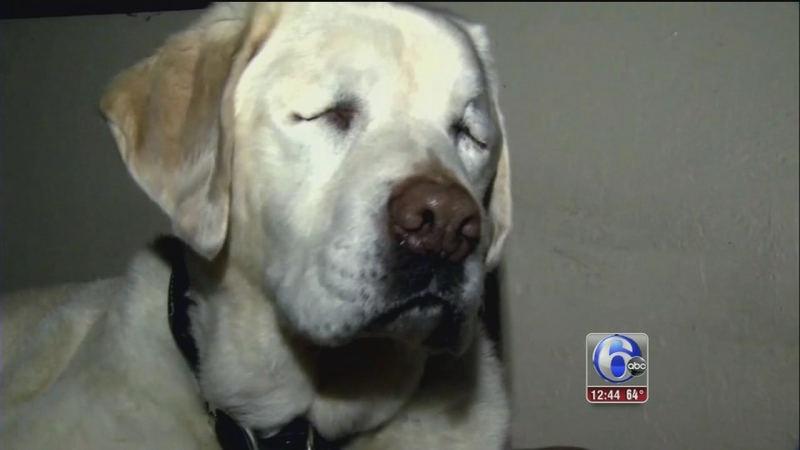 BOULDER CREEK, Calif. -- It could be called a canine miracle in the Santa Cruz Mountains -- a blind dog was found alive after disappearing into the cold, wet woods for seven nights.
"It was horrible," said Sage's owner Beth Cole. "We were so heartbroken and just feeling so bad that she was out there."

Sage is a 12-year-old, yellow lab who lost both her eyes to health problems. On Feb. 24, the blind dog wandered away from her Boulder Creek home.

"We had so many people helping with the search. We had signs up, we had it posted everywhere," said Cole.

It seemed as if Sage had disappeared. The Coles even brought in a handler with a tracking dog to no avail. After seven nights, they'd all but given up hope.

Their neighbor Dan Estrada, a firefighter, had helped in the search, but that's not why he was in the woods Saturday. He was taking a friend from out of town on a hike.
"And while we were hanging out talking, next thing you know, I look over and see Sage laying on the ground right with her head in the stream," Estrada told ABC7 News.

He thought she was dead, but then -- she lifted her head.

"I jumped in the stream, I was super happy," Estrada said. "I put my arms around her and hugged her and threw her over my shoulders and carried her up the mountain."

"I was hugging everybody, you know, his friend, him, my son, Sage you know," Cole added. "It was just amazing."

Some would say it was a miracle.
"It's been harsh conditions and that dog had such a strong will to live," Estrada continued. "And I think everybody has a lesson to be learned from that: Don't give up."

In honor of Sage's survival, Estrada and his friend made seven custom leather leashes, one for each night she was missing. They'll be raffled off at a fundraiser for the Humane Society.