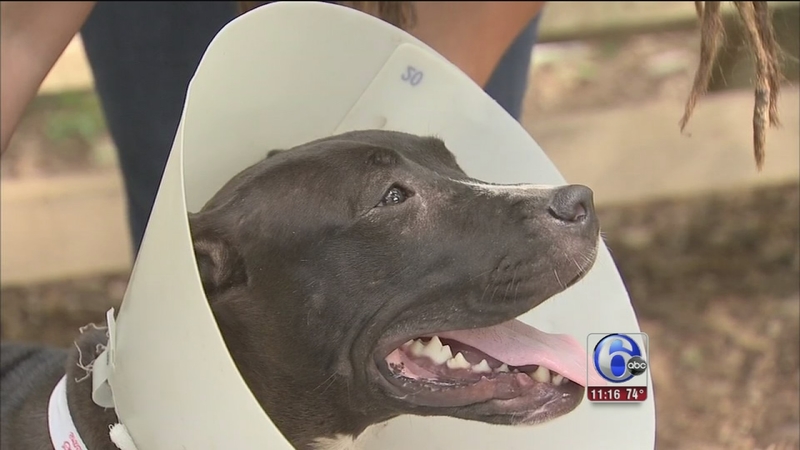 CHESTER, Pa. (WPVI) -- A friendly dog was brutally stabbed in Chester and investigators are asking for the public's help to find the person responsible.

Wearing a protective plastic cone the pit bull terrier is recovering from a terrible incident.

The young dog was stabbed repeatedly with a very sharp object, possibly a knife.

"Very deep lacerations all over her body from her stomach to her paws to her upper body," said Calgiano.

The animal was found hiding in a grassy area of a water treatment plant in Chester, Delaware County.

Investigators with the Humane Society say the stabbing may have happened near where she was found.

"I'm hoping somebody in the neighborhood on the dead end streets know something they can share to build the case a little better," said Ron Riggle, Delaware County Humane Society.

SPCA workers have named her 'Lovey' and for good reason.

"We named her Lovey because she's just so extremely affectionate for everyone she meets," said Calgiano.

Lovey didn't have a collar or microchip so who had her last is unknown. The goal now is to find who hurt her.

"That's why we're asking people to call us if they know a possible owner or saw this dog being mistreated so we can find justice for Lovey," said Calgiano.

The person responsible is likely to face animal cruelty charges.

As for Lovey, her health is improving as workers care for her at the Delaware County SPCA.