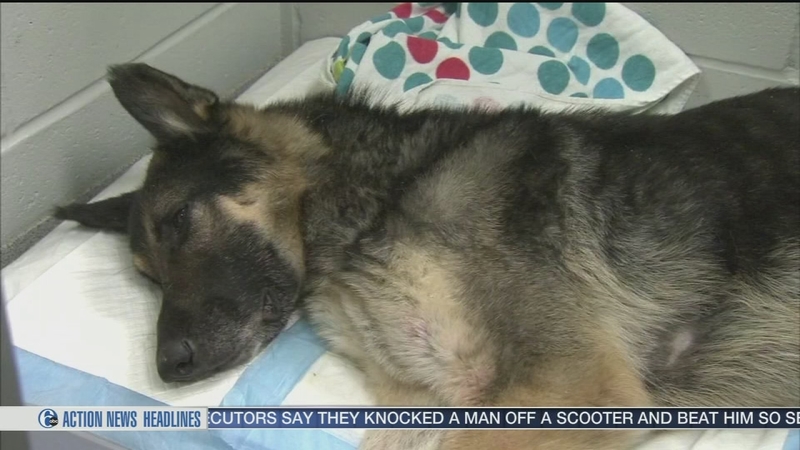 The dog escaped from his home in Allentown, New Jersey and was lost outside in the brutal cold for almost a week.

River was finally found Wednesday starving, dehydrated and frozen to the ground.

"He was very weak, he couldn't really stand. He wasn't responsive to us. He was clearly emaciated," Dr. Meghan Respess of NorthStar VETS said.

River lost 30 pounds during the days he was missing.

He was located in the woods 5.5 miles from his home by his owner Dina Alborano, a snow shoe racer.

"I was just out of my mind. It's just the fact of not knowing. It just eats you away," Alborano said.

Dina searched for 6 days tracking miles through the snow.

She was about to give up, but something told her to keep on looking.

Finally, she found him.

"He literally looked up very slightly in recognition, but it was like he wasn't there. I didn't think he was alive," Alborano said.

Doctors at NorthStar VETS in Robbinsville are treating River with IVs, a blood transfusion and pain meds.

The dog is still too weak to stand on his own and has to be helped by technicians.

River wasn't intentionally left outside, but veterinarians say pet owners should take note about the devastating effects exposure to the cold can have for animals.

"They shouldn't underestimate the fact that just because they have fur and can maintain their body temperature outside a little better than us, prolonged exposure can lead to death," Respess said.

And, the doctor says, River was very close to that.

"I know everyone says he's not quite out of the woods, but what I saw and the turnaround he's made and he has the will to live, I think he's gonna make it," Alborano said.