Turkeys are pets not dinner in Southampton, NJ 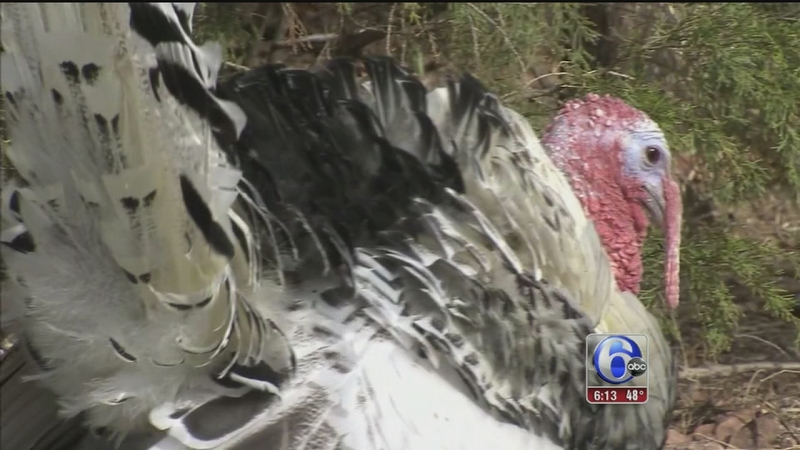 VIDEO: Turkeys without a care in the world

SOUTHAMPTON, N.J. (WPVI) -- This time of year you can understand if turkeys are a little nervous, but two named Bob and Fred have nothing to worry about.

Winding up stuffed on the Thanksgiving table is not a possibility for them.

They are pets living in relative luxury in Southampton, New Jersey where Brenda Jones loves them like family.

"They're more than family. I never dreamed that I would have turkeys that are 13 years old and I've gotten so much enjoyment and fun out of them," Brenda said.

Fred is the showier of the two, strutting around the yard with his feathers spread while Bob is a shy bird. He's got a bum leg and limps. Brenda nursed him back to health years ago and admits he's her favorite.

"Fred gets jealous of all the attention I give to Bob," Brenda said.

These teenage turkeys used to belong to a neighbor, but were always hanging around Brenda's house.

"As time went on I just started growing more attached to them and started feeding them more and then my neighbor was like 'go ahead and keep them,' so I did," Brenda said.

They live in sturdy backyard pens where they gobble up the cracked corn, grapes and sunflower seeds Brenda feeds them.

And that Fred? Well, he's a wild turkey.

"Fred has a number of girlfriends," Brenda said.

Bob and Fred are domestic turkeys, a breed called Royal Palm. Lucky for them, they're considered too small to be cooked for Thanksgiving.

"When a farmer's going to raise these, they want something over 22 pounds. But these are the most beautiful and ornamental of all turkeys," Brenda said.

Animal lover that Brenda is, this former vet tech would never consider eating Bob and Fred for dinner.

And so no one gets their feathers ruffled this Thanksgiving, she's opting for something other than turkey.

"I think I'm going to have pasta," Brenda said.