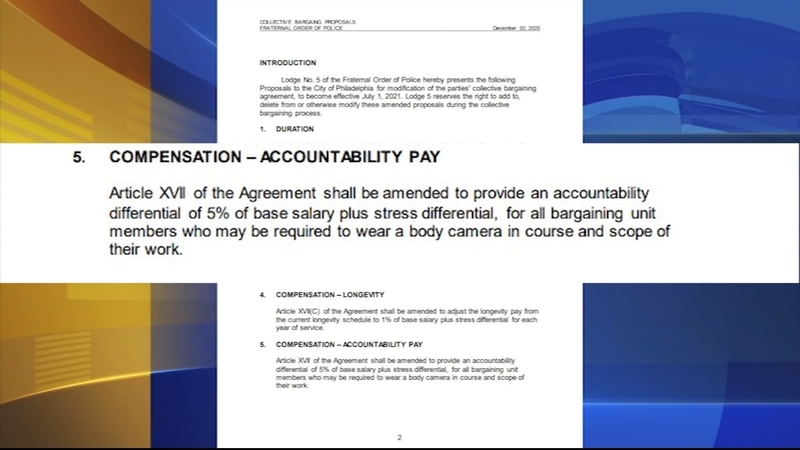 Specifically at issue is a line item calling for a 5 percent boost in "accountability pay" for officers to wear body cameras.

"Why are you asking for a bonus to be transparent and accountable for your work? It speaks to an overall issue of what we were seeking to achieve and accomplish with the hearings in the first place," said Gilmore Richardson in an interview on Wednesday.

The FOP is also asking for additional financial compensation to live in the city and for clothing, maintenance and technology for officers. Many use their own technology like cell phones.

The City of Philadelphia's proposal, also on their website, requires a residency requirement. It also suggests changes to how the department handles disciplinary action.

It would let police set disciplinary procedures on their own and limit back pay for officers fired or disciplined. Arbitrators would no longer be able to overturn discipline for officers with proven misconduct and would provide the ability to demote officers who can't fulfill department duties to a civilian position.

The police budget takes up about $700 million of the city's annual budget. Gilmore Richardson adds that is why input is so important.

"It's also important to us to have changes to this process because it affects our city budget. Over $700 million of our city budget is devoted to the Philadelphia Police Department and 90% of those costs are for class 100 costs so it's important we get this right now," Gilmore Richardson said.

On Thursday, Gilmore Richardson's office will release findings from a seven-hour hearing of public testimony on police reform. The legislation for the hearings passed City Council. The FOP then sued to halt them but lost.

"We are going to release this report so we can report out what we heard so we can continue to be transparent and accountable in the work we do and we hope to look at those recommendations we heard from Philadelphians as a blueprint," Gilmore Richardson said.

The "blueprint" is part of an overall effort of police reform that cities across the country are now calling for.

Philadelphia's FOP is not alone in their idea as social justice reforms dominate many cities across the country. Other unions are weighing similar incentives and amongst law enforcement many officers believe body cameras are helpful and support transparency.