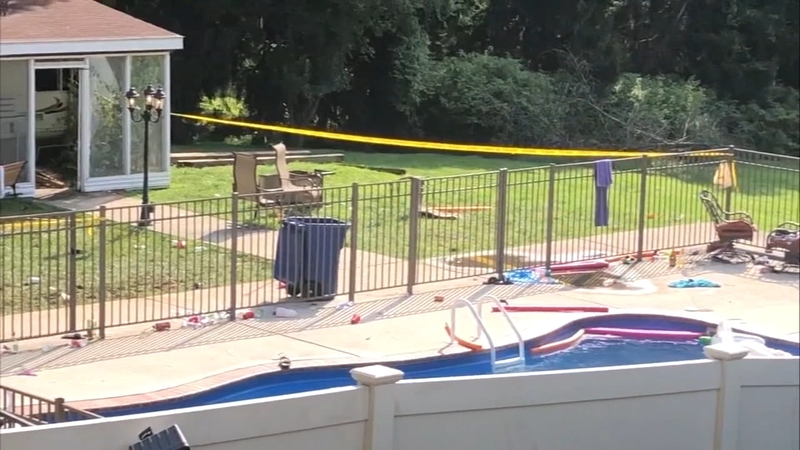 PHILADELPHIA (WPVI) -- The father of 20-year-old Asia Tucker says she nearly died Saturday night. But thanks to quick thinking and some help from someone at a pool party with hundreds in attendance, she's going to live.

"She remembers running and hiding behind a tree and told someone to tie her leg off and that's what saved her," Wayne Tucker said.

Tucker says Asia was one of two women shot in the leg around 8:30 Saturday night in the 9100 block of Verree Road in Bustleton.

A fight broke out just as the sun started to set. According to Tucker, it was after the fight his daughter was wounded.

"She got shot and blew out an artery so she was dead on arrival and they brought her back," he said.

The other victim was just 18. She was shot in the right knee but is now stable.

"If everyone would put the guns down life would be a lot better," Tucker said.

Tucker also says his daughter told him from the hospital bed the party was promoted on Instagram and that's why it got so crowded.

After the shooting the crowd took off in every direction. People left clothes, purses, shoes and bottles scattered all over.

Police spent Sunday morning combing over the scene, even using a metal detector, for clues to find the shooter.

We spoke with a neighbor who says she was outside in her car as the crowd dispersed.

"Teenagers were coming up to me. The skin on their feet was peeled off and they were bleeding, glass in their feet. There must have been anywhere from 100 to 300 kids running down the street," she said.

Neighbor Mike Novak says with such a huge crowd he knew it wasn't going to end well.

"I was in my kitchen right here and that's when I heard the gunshots. I looked out the window and there were just people everywhere," Novak said.