It's a slam dunk for fans of the Philadelphia 76ers and Dunkin' Donuts.

The basketball team and donut company have announced a partnership that makes Dunkin' Donuts the official coffee, donut and breakfast sandwich partner of the Philadelphia 76ers.

What does this mean for you?

How about a 76 cent medium hot or iced coffee on 76ers home game days?

But there are a few caveats:

You can become a DD Perks member though the website DDPerks.com or via the app.

The collaboration does not stop with 76 cent coffee.

76ers fans will see a sprinkling of the Dunkin' Donuts partnership at the games themselves.

The teams say during the upcoming home game against the New York Knicks, more than 200 mini-parachutes carrying Dunkin' Donuts coffee cups and gift cards will deploy from the rafters for the fans in attendance.

And forget the 76ers Flight Squad! They are now known as the 76ers Dunk Squad. 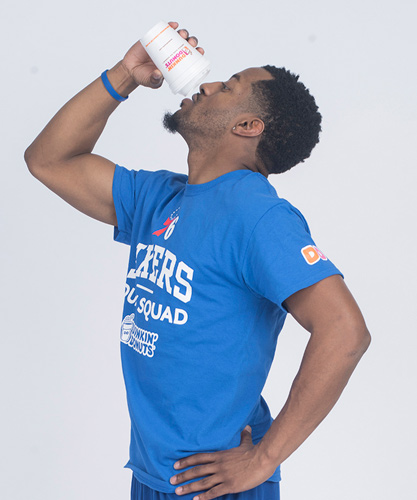 The squad is bringing some new props along with their new name.

There is also the first-ever 76ers-themed donut at participating Dunkin' Donuts restaurants.