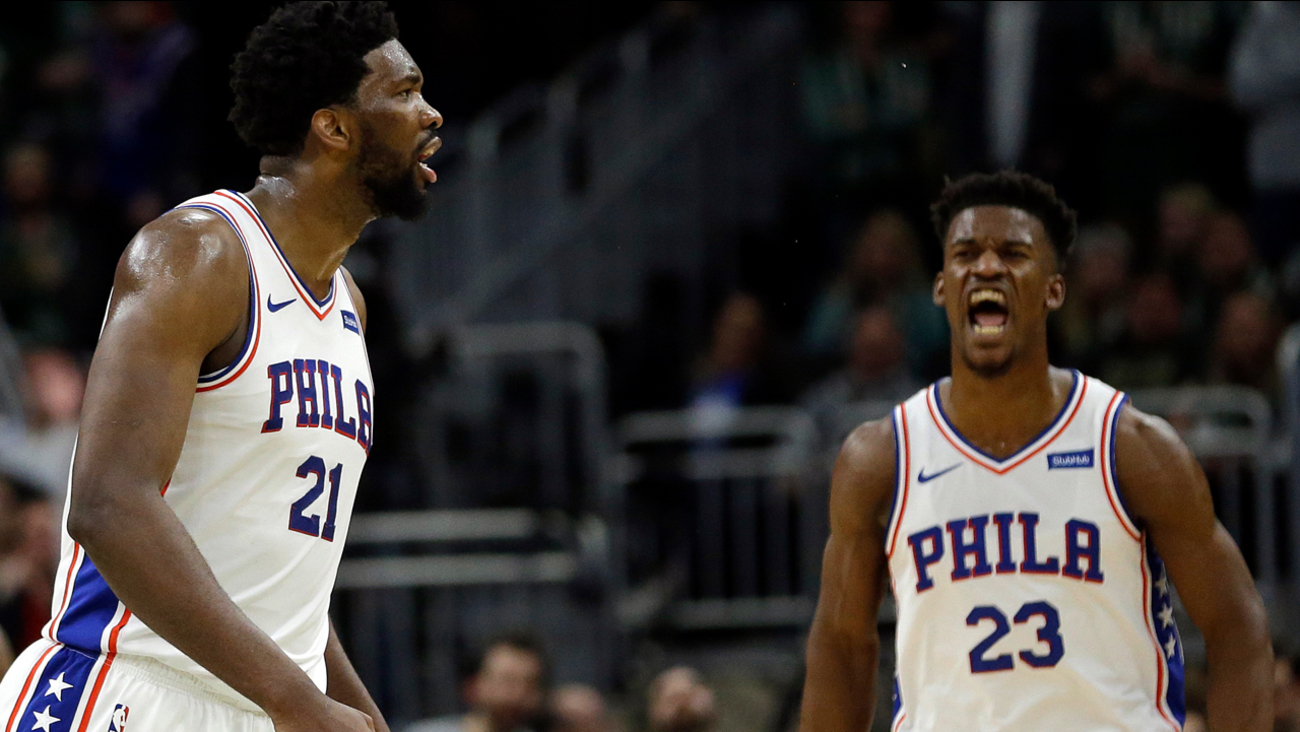 PHILADELPHIA -- The Philadelphia 76ers have clinched playoff berth with a win over the Milwaukee Bucks on Sunday.

Giannis Antetokounmpo scored a career-high 52 points, but Joel Embiid had 40 points and 15 rebounds to lead the Philadelphia 76ers over the Milwaukee Bucks 130-125 on Sunday.

Antetokounmpo was 15 of 26 from the field, including 3 of 8 from 3-point range, and made 19 of 21 free throws to better his previous career best by eight points.

Embiid and the Sixers weathered a late charge by Milwaukee to beat the team with the best overall record in the NBA (52-18) and the top home record (27-6). It was the fifth time this season Embiid scored 40 or more points and came in his fourth game back after missing nine straight with left knee soreness.

Jimmy Butler added 27 points, JJ Redick 19 and Tobias Harris 12 for the Sixers, near the top of the Eastern Conference standings at 45-25.

Milwaukee had a brief scare when Antetokounmpo was fouled on a driving layup and landed awkwardly late in the third. He got up favoring his right leg, but then sank one of two free throws.
Embiid scored 18 points and Butler had 14 in the fourth quarter. Antetokounmpo's three-point play pulled the Bucks to 118-114 with 1:18 to go, but Ben Simmons then tipped in Embiid's miss.

The Bucks got to 3 points twice in the closing seconds, but Embiid and Harris each made two free throws to seal the win.

Mike Scott hit a wide-open 3 to give the Sixers a 98-86 lead early in the fourth and force the Bucks to burn a timeout.

Scott also provided a fun highlight - late in the first quarter, he made a dive into the stands trying to save a loose ball. He landed in the second row, surprised a fan by taking a quick sip of her drink, and ran back on defense as play continued.

Bucks: Nikola Mirotic started for Malcolm Brogdon, who is out with a minor plantar fascia tear in his right foot. Brogdon had started 64 of 69 games and is out indefinitely. . Recalled F Christian Wood from the Wisconsin Herd.

There was a pregame moment of silence for the victims and survivors of the New Zealand mosque attacks.

76ers: Play at Charlotte on Tuesday.