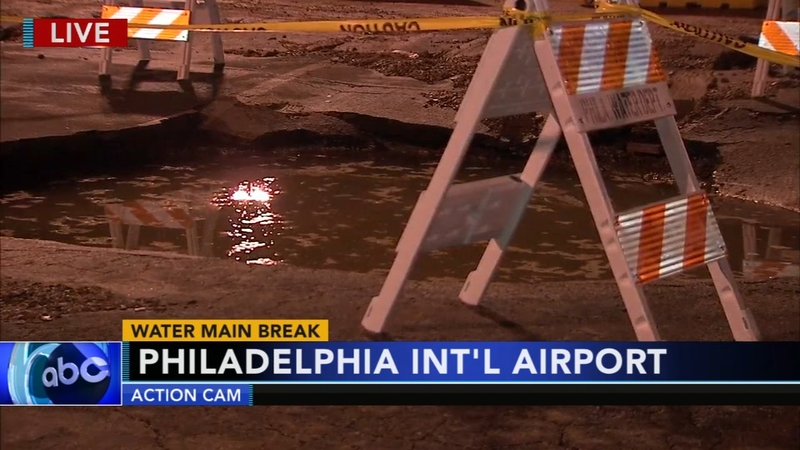 Shortly before 4 p.m., Airport officials said there was no water pressure throughout all of the airport's terminals.

Video from Chopper 6 HD showed a large water main break in the economy parking lot near Terminal E. Water could be seen gushing out from the pavement.

No water pressure at PHL for several hours following main break: Dann Cuellar reports on Action News at 11 p.m., May 7, 2018

Officials said it was a 16-inch main that ruptured and caused significant water pressure issues throughout the terminals at the airport, including numerous public restrooms.

"What happens is you can't use it. They are all full, clogged up and full of paper towels," said Chris deVaney of Unionville, Pa. "I guess people tried to flush them and they wouldn't."

Airport patron Robert Scott wrote to 6abc.com detailing the conditions, saying liquid from the restrooms is spilling out into the main corridors:

"It's horrible here. Some restaurants are closed but others remain open. It's unsanitary and unsafe," he said.

In the interim, airport officials distributed hand sanitizers to all restrooms.

Announcements could be heard throughout the facility, alerting passengers to the water pressure problems.

"There are a couple of mains that come through here so we had to figure out which main it was on and then we had to locate the valve, which was a challenge in the parking lot," said Philadelphia Water Department Commissioner Debra McCarty.

After approximately three hours, the water department was able to shut down the ruptured line and reroute water to the airport through another main.

UPDATE The Philadelphia Water Department has re-established water pressure and PHL is bringing systems back on line.

This is fortunate, as the water department says repairs could take some time.

"We have a lot of old mains in the system and we are trying our best to spend our repair money very wisely," said McCarty.

The Philadelphia Parking Authority towed a number of cars out of the area in order to facilitate repairing the main.

Vehicle owners are being asked to check with PPA to find out where they can retrieve their cars.