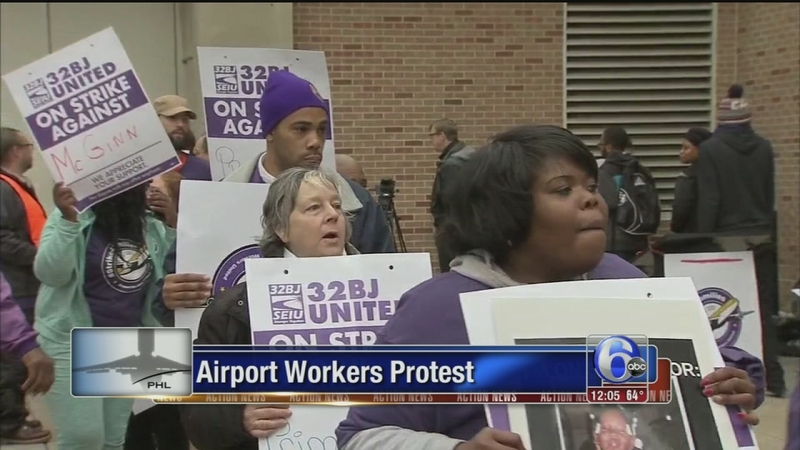 And they're all protesting their pay, and what they say are unfair labor practices.

"We come here working sick, injured, without sick days, benefits," PrimeFlight baggage handler Alfred Williams told Action News. "We can't afford to take off any days. If we take off, they threaten us. Intimidation."

Before the sun came up Thursday, you could hear their chants, see their signs.

They've protested here before, but what makes this day different is that for the first time this strike has been coordinated with workers in five other cities: Chicago, Boston, New York City, Newark, N.J. and Fort Lauderdale.

It comes right before one of the busiest travel weeks of the year.

"Families are going to be traveling everywhere to see their families," said Daisy Cruz, Mid-Atlantic District Leader for SEIU Local 32bj. "These brothers and sisters here can barely support their families."

The workers say while airlines are reaping record profits, they are struggling to survive on low wages with few days off and little to no healthcare coverage.

Organizers say some were promised raises months ago that they never received.

"It's time to change behavior," said Philadelphia City Councilman Bobby Henon, who addressed the protestors. "Subcontractors need to pay what they're supposed to pay by law."

"We can't be an international city if we're paying poverty wages," she said.

The workers want to unionize. Former wheelchair attendant Tom Zoker believes he was fired for trying to mobilize his colleagues.

"As they've tried to talk about the working conditions, we believe they've been illegally threatened, intimidated and harassed. Some have been illegally terminated. So, they are on strike to stand up for themselves," said SEIU representative Gabe Morgan.

The picket line was been set up near the Terminal B departures area.

The impact the job action was having on travelers at the airport Thursday was not immediately clear.

A PHL spokesperson told Action News the airport was working to make sure operations continued smoothly.

Subcontracted airport workers on strike at cities across the country today- already picketing this AM at PHL. pic.twitter.com/KjLEfn5LVf