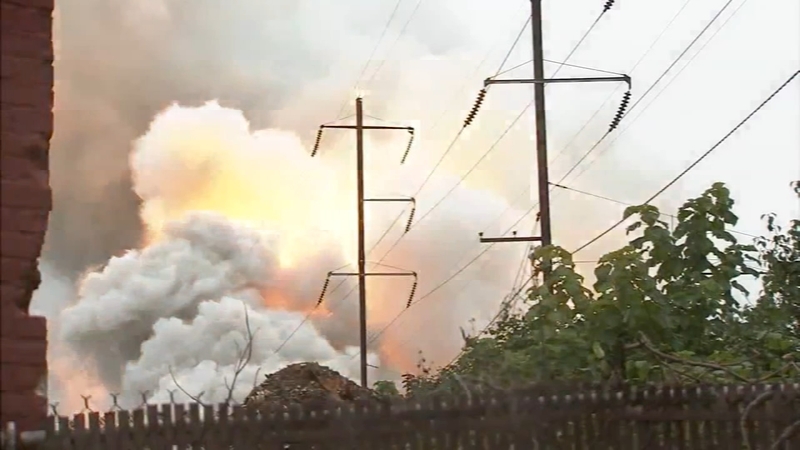 PHILADELPHIA (WPVI) -- Travelers are hoping for a better commute Monday at 30th Street Station after a junkyard fire suspended rail service in Philadelphia.

It happened just after 7 p.m. Sunday near the intersection of Torresdale and Adams avenues in Frankford.

The sound of transformers exploding filled the air as fire ripped through a warehouse.

Thick, black smoke could be seen for miles, hours after the stubborn fire began. The flames grew so intense as they inched close to high-tension power lines.

The heart of the fire fell right next to rail lines, and, late Sunday, officials from both SEPTA and Amtrak were inspecting the tracks.

SEPTA says service on the Trenton line has been restored. They aren't expecting delays, but that could change with more traffic on rails. SEPTA's Chestnut Hill West service was restored Sunday night.

Amtrak says all tracks that were closed due to the fire near Philadelphia have reopened. They say service has resumed normal operations on the Northeast Corridor.

Swells of people packed the sidewalk outside of 30th Street Station, waiting for an Uber or Lyft to take them where trains could not.

"When we were pulling in the guy said there were three trains ahead of us," said Ward Turner, who was on a train heading to New York City. " We got to the station and he informed us there was a huge fire and that the train ahead of us had been here for an hour and a half."

Inside 30th Street Station, the board spelled out headaches for customers.

"I'm taking the train back to DC," said Ava Bedden. "I am now booked on a 7 a.m. train tomorrow morning, so we are hoping there is no fire on the tracks."

There was a major response to the fire, even though it was not impacting any homes in the area.

Officials said scrap metal and tires are fueling the fire, and because of that additional resources are on the ground, specifically crews with Heavy equipment.

There are no reported injuries at this time.
The cause of the fire is unknown.