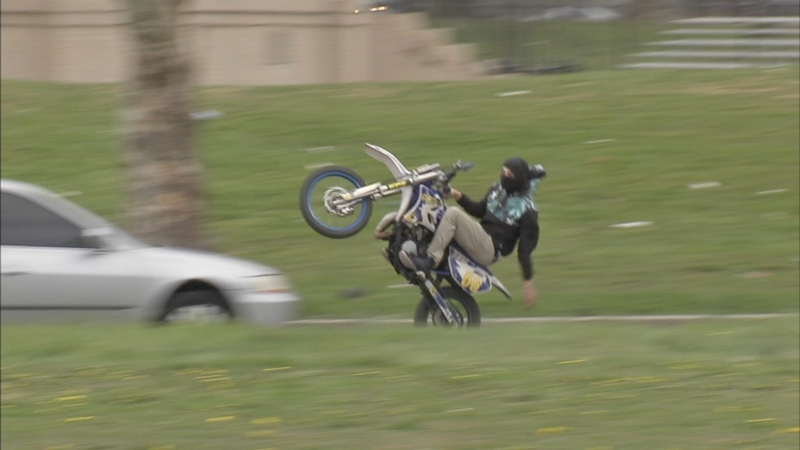 Riding on the vehicles off-road is legal on private property and in some, but not all, public areas - public areas that are clearly marked.

But riding the vehicles on city streets is highly illegal.

"There are no headlights, no tail lights, no brake lights and they're out there riding in the dark. People do not see them," said Philadelphia Police Det. Jack Logan.

A 27-year-old father was riding a minibike with his 6-year-old son when they were struck by an alleged drunk driver in an SUV.

Police said the bike was not registered nor was it street legal, it had no lights and neither party was wearing a helmet.

The 6-year-old was killed and the father was severely injured.

The fatal crash was another reason why police are once again beginning their annual crackdown on the illegal dirt bike and ATV riders.

Philadelphia Police Capt. Steve Clark, who runs the initiative, said it doesn't help that gangs of dirt bike and ATV riders running rampant through the streets and neighborhoods are glamorized on social media. He said the vehicles racing through the neighborhoods is one of the biggest complaints he gets from residents.

"Regardless of what neighborhood we're having our meeting in it is, 'What are you going to do about the ATVs? It's killing our quality of life," said Clark.

Det. Logan said another problem is the drivers' blatant disregard for traffic laws.

"They go through red lights, through stop signs and down sidewalks," he said.

Police began a crackdown this weekend and they have already collected a cache of vehicles from those who were riding illegally on the streets.

Police said the owners are allowed to retrieve their vehicles, but they have to pay a $2,000 fine, towing, storage and court costs. They said by that point most people don't even bother.

"They'll sit there for approximately 30-60 days and then they'll be sent up to a junkyard and crushed," said Logan.

Police said they would rather not confiscate anyone's vehicle.

"There are places to do this," said Logan. "There are other ways to have fun. Please don't use the ATV and dirt bikes to do it, because we'll be out there trying stop you."