Philly leaders to consider closing loopholes on illegal use of ATV, dirt bikes 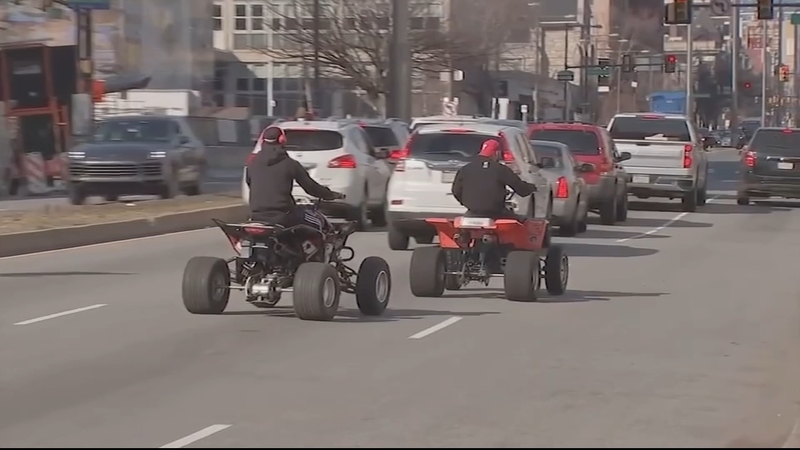 PHILADELPHIA (WPVI) -- A Philadelphia councilman with the support of others plans to introduce new legislation Thursday to help close loopholes in laws centered on enforcing the illegal use of ATVs and dirt bikes on city streets.

There are many stories about encounters with people illegally riding ATVs and dirt bikes across the city.

"One time I was driving right near City Hall and a dirt bike crashed into the car in front of me," said resident Gabriel Polinsky.

Others have witnessed unsafe behavior.

"Last week there was a bunch of them coming the wrong way up the street while I was at a restaurant," said resident Ellen Swartz Siegel.

Siegel was one of hundreds of community members from across the city who met virtually Wednesday night with local leaders; all are worried over this issue.

"There are people riding on the sidewalks. Wait until somebody gets killed and then we'll have action," said Philadelphia Council Member at-large Allan Domb.

Residents from across Philadelphia met Wednesday evening to air concerns over the lack of enforcement of illegal ATV and dirt bike riders.

Some members of City Council plan on introducing new legislation to help close loopholes in the law.
"We had a gap in our legislation that didn't treat all these illegal vehicles the same," said Councilman Mark Squilla. "What this legislation actually will do is to group all the illegal vehicles into one form and give the police the authority to confiscate them."

Deputy Commissioner Joel Sales said so far this year police have confiscated more than 200 of the vehicles, but a change to the law would help make additional progress.

Police cannot chase the riders and are limited to stopping them if they're threatening or harming someone, according to Philadelphia Deputy Commissioner Joe Dales.

"We can only pursue if it's a serious crime, if a person committed a forceable felony," said Dales.

A violent incident happened in March where officers later arrested a man on an ATV who was accused of throwing cinder blocks at a driver and pulling out a gun.