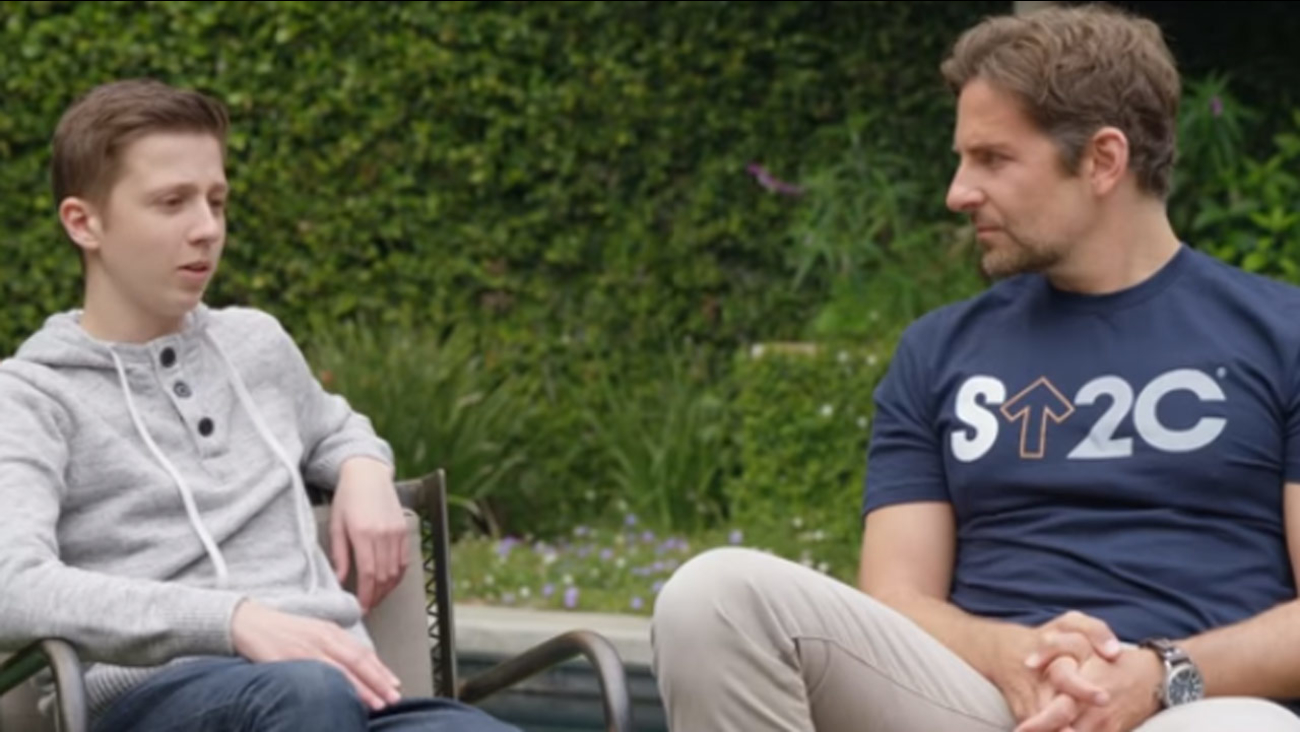 PHILADELPHIA (WPVI) -- In 2016, Jenkintown native Bradley Cooper was the host of the Stand Up To Cancer telecast. That's when he met Washington teenager Mitch Carbon. They formed a bond that has grown ever since.

In a video posted by Stand Up To Cancer, Cooper, who is the executive producer of this year's broadcast, spoke with Carbon about their similar journeys dealing with cancer in their lives.

Carbon was diagnosed with leukemia at age 13. Cooper lost his father to lung cancer in 2011.

"My experience with my father, even though you know you're not the only one, it feels very isolating, and that's why I got so excited to get involved with Stand Up To Cancer, to remind each and every individual that's suffering that there is a community," Cooper said.

Cooper and Carbon both realized the impact cancer had with their familial relationships.

"With my father, it brought us together in a way I didn't even think was possible," Cooper said.

Carbon agreed. He called his family his rock.

"I think our relationship now, I think, personally, it's far stronger than it would have been if we hadn't gone through this," Carbon said.

It was his mother, Carbon said, who was determined to find a way to make things right.

In 2012, in a hospital room in Washington State, his mother Kari was watching the Stand Up To Cancer telecast with him, when they saw the story of 7-year-old Emily Whitehead.

"I remember watching that telecast in a hospital bed with my mom, actually. It was totally just unreal. It was like 'Is this actually possible?'" Carbon said.

Whitehead had been diagnosed with leukemia and had been fighting for more than a year when her family came to Children's Hospital of Philadelphia.

At CHOP, Whitehead's parents were told their daughter qualified for an experimental treatment for relapsed leukemia. After multiple conversations with the doctor, including about risks, the family decided to enroll Whitehead into the clinical trial.

On April 17, 2012, Whitehead became the first pediatric patient to be treated with T-cell therapy. CHOP said three weeks after receiving the treatment Whitehead was in remission.

"In the type of leukemia Emily had, and the type Mitch now had, the cancer took over the body's B cells. Normal T cells, a type of immune cell, don't detect or attack the cancerous cells. In the experimental treatment Emily had received, T cells were collected from her blood and genetically reprogrammed in a lab to find so they could find and kill cancerous B cells," CHOP explained on their site.

"My doctor didn't have any options left for me. And without that information, I probably wouldn't have been saved," Carbon said.

Carbon said his mother found everything out about the procedure.

"She was so dedicated," he said.

Carbon's mother Kari picked up the phone and called CHOP.

According to CHOP, Carbon would not have been a candidate for the trial a year prior to that call.

"We had treated a small number of patients with a very small amount of disease in their spinal fluid. But we hadn't treated anybody with a large amount of brain leukemia like Mitch, because we thought it might be too risky. But we knew for sure there was no other possible treatment for him," Stephan Grupp, MD, PhD, the oncologist leading the study at CHOP, said.

In March 2015, CHOP alerted the Carbons that Mitch had been accepted to the program. He arrived in Philadelphia that summer.

The doctor told Carbon of the risks and that the treatment had never been tried on anyone with his degree of brain leukemia.

"And Mitchell's response was, 'Will you be able to use my data even if I don't make it?'" Carbon's father Rob recalled in in a Stand Up 2 Cancer 2016 'Patient Story' video.

Kari continued the story, "And he said, 'Yeah Mitch, we're going to learn a lot from you. But the reason we're here is to save your life.'"

After receiving the first infusion and being allowed to go back to the Philadelphia hotel with his parents, Carbon spiked a fever. He was admitted to CHOP where he remained in a coma for five days.

Then, in the middle of the night, his family says Carbon opened his eyes, and with his parents by hospital his bed, he said, "Hi Dad." A week later, Carbon left the hospital.

Fast forward to the present and Carbon will be a junior at Whitworth University.

"It's a dream come true, honestly, because everyone has their thing where they put hope, where they find hope, and for me, college was that. Even when I was terminal, I still wanted to go to college," Mitch said. "In the past, my problems were 'am I going to live till tomorrow?' But now my problems are 'am I going to turn this paper in on time?' I just feel a lot of gratitude that I am able to make it to this spot,
because not a lot people get to make it - and, of course, we're going to change that."

Cooper asked Carbon what it feels like for him now that's his story is out there being broadcast to millions of people, and the potential impact it has, the way Whitehead's story had on him.

"It's very humbling. Every regular person has been effected by cancer. Just the fact, I can have that connection to people was really uplifting and it felt like we could all come together and move forward," Mitch said.

"So what's next?" Cooper asked Carbon.

"I don't know what's next," Carbon pondered, before making one more quip - "I mean, you're the executive producer."

"Thanks for reminding me," Cooper laughed.

The Stand Up To Cancer telecast returns on Friday, September 7 at 8 p.m. on 6abc and many other TV stations and online sites.