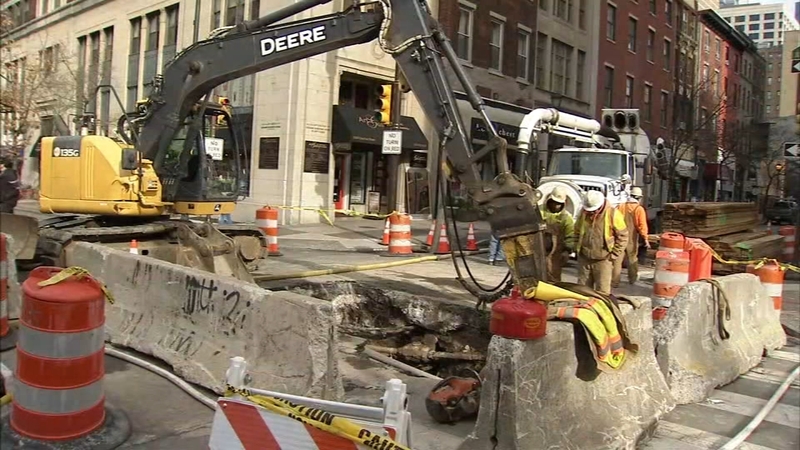 PHILADELPHIA (WPVI) -- Some streets in a typically busy portion of Center City Philadelphia are still shut down as work continues to fix a gaping hole at 20th and Chestnut.

It's been a week since a sewer line collapse buckled the roadway, and fixing it has turned into quite a complicated process.

In fact, the Philadelphia Water Department said work will continue for the next few weeks.

"For the time being the street will be closed. Chestnut Street and 20th Street in both directions, and we'll have crews out working here until repairs are made - and the street is back open - which should take two to three weeks," said John DiGiulio of the Philadelphia Water Department.

DiGiulio explained the sewer line is about 148 years old. Bricks were missing and the line had collapsed in some places.

The area had to be carefully excavated with great care so as to not impact adjacent infrastructure and utilities.

"We do need to repair the sewer but there's also some utility complications in the area. So there's gas lines and electric lines that we need to be able to work around and do so safely," DiGiulio said.

All of this is a major inconvenience to people who live nearby, as well as businesses like EAZY computer and iPhone Repair and New Image Art Gallery and Framing.

The last week was bad and now they're processing the news that the closure will last a lot longer.

"It's going to be worse. All my neighbors, they're complaining," said Bet Otkor of New Image Art Gallery and Framing. "Traffic is very slow. It's affecting business big time."

"A lot of people calling us and saying, 'Hey, why is the street closed?' They couldn't get here so it's a little bit hard on us," said Charlie Son of EAZY Computer and iPhone Repair.

"We put out a letter yesterday to communicate with everyone in the area right around here. If they have any deliveries or concerns to reach out to us. We'll work with people that need to have deliveries made whatever it is we can do," he said.

Chestnut is closed from 21st Street 19th Street, while 20th Street is closed Sansom to Market.

This is not something that happened because of the weather, but the repair timeline could be impacted by the weather. They'll work in the cold, but snow could set them back.