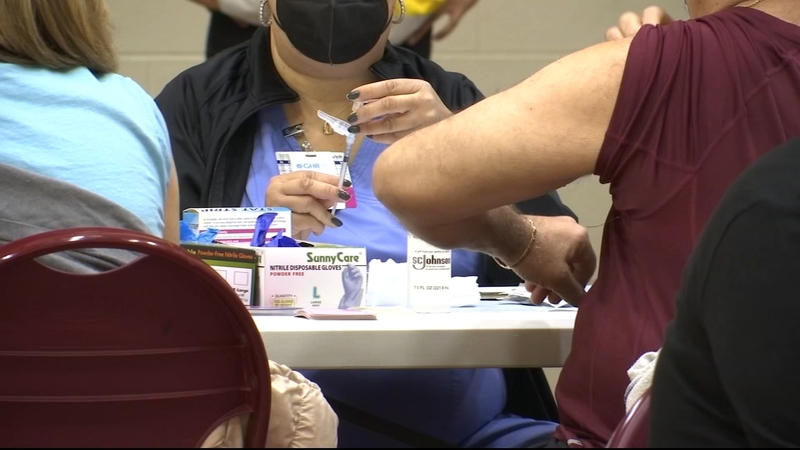 PHILADELPHIA (WPVI) -- Philadelphia opened its third neighborhood clinic in a week at the University of the Sciences in Southwest Philadelphia, which vaccinated 325 people its first day.

The city expects to double how many weekly vaccine doses it gets for the first week of March in hopes of distributing them quickly.

"I'm just glad to be here today," said Tina Knight from Mount Airy. She says she can see more people after being vaccinated. "It's been dreary a little bit. You can't do anything. You can't go out."

"When you can come to a neighborhood site where you know folks and you know the facility, it makes it much easier for people to have great faith in they're getting the right thing done," said Philadelphia Mayor Jim Kenney.

The health department also opened clinics in North Philadelphia and Juniata this week, a few of the 100 sites in the city currently approved to inoculate residents.

"We will continue to do this circuit in these places as long as is necessary, and we're going to be looking at ways to reach other neighborhoods as well," said Dr. Thomas Farley, the city's health commissioner.

The city scheduled appointments at these clinics based on its online vaccine interest form. It picked out people in phase 1B, based on age and chronic health conditions, who live in the neighborhoods around the sites.

"Our Black and brown neighborhoods have been disproportionately bearing the impact of this virus," said councilmember Jamie Gauthier, who is representing the district where the newest clinic opened.

With clinics in neighborhoods, the city hopes to bridge the racial gap in its vaccine distribution, where African-Americans account for only 22% of doses but 44% of the city's population.

"There are a number of factors at play. I think the distrust in the healthcare system is one of them," said Gauthier.

Randolph Fair Sr. from North Philadelphia said, "I'd rather go through this right here than go to the hospital."

He says he has family members who are hesitant about the vaccine but hopes he sets an example for them to follow.

"I take medication that has more side effects than what I went through," he said.

Another new clinic this week will be the FEMA mega site at the Pennsylvania Convention Center.

The federal government will be providing 6,000 doses a week there.