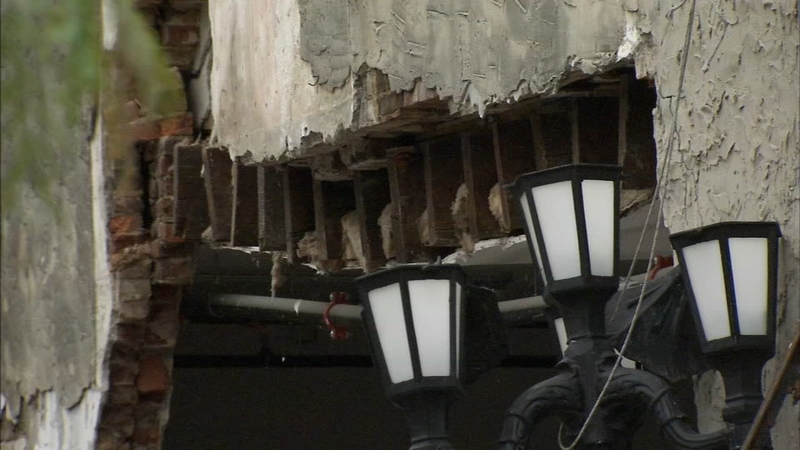 NORTHERN LIBERTIES (WPVI) -- Four people have been rescued after an apartment building that partially collapsed in the Northern Liberties section of Philadelphia.

The collapse occurred around 4:35 a.m. Thursday on the 700 block of North 2nd Street.

Emergency crews were called to the report of a partial interior collapse of the three-story building.

Officials say the building suffered cracks in the walls, and the windows and doors shifted trapping three occupants inside a third-floor apartment.

Fire officials say the building suffered cracks in the walls and the windows and door shifted trapping the occupants inside the apartment.

Well in so many cases like this when a building collapses it ends in tragedy but this morning that was not the case.

All four people made it out safe though it certainly was a scare.

When Steven Westbrook was woken up around 4 a.m. he knew it wasn't good.

"We heard a loud noise, thought it was an earthquake, the apartment started to shift and the floor dropped," said Westbrook.

The reality was that his apartment building was partially collapsing.

When the building collapsed, Westbrook and his two roommates became trapped.

The door out to his apartment became wedged when the shifting began.

A giant portion of the first-floor wall caved in, and other parts of the wall are now severely cracked.

Westbrook says he knew at any moment the building could come down.

"The fact that you wake up to your bed being shifted and you feel like your falling through a wall is very disconcerting," he said.

Westbrook works as a personal trainer and as a result, has to know basic emergency procedures.

So he had the wherewithal to take action, and not panic.

One of his roommates took pictures while waiting for help.

One of the walls split down the middle.

It also began to separate from the kitchen.

But firefighters quickly arrived and broke open the doors.

Westbrook and his roommates made it out safely.

As did another person in the building connected next door.

While the investigation begins to figure out what happened, a neighbor who heard the collapse also told us renovations were being done inside.

Bill Murphy of Northern Liberties said, "They're not quite finished. They're still working on the first floor."

And though everyone made it out safe those rescued say now they can't go back into their apartment.

Now they have to figure out where they're going to call home for the near future.

All four people were evaluated at the scene.

Fire officials say no other apartments in the building were occupied.