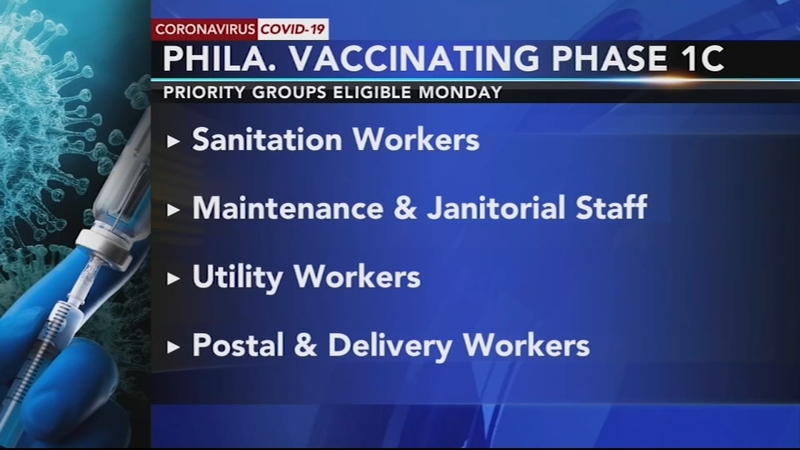 PHILADELPHIA (WPVI) -- Philadelphia will partially move into Phase 1c of its coronavirus vaccine rollout next week, officials announced on Thursday.

Beginning Monday, April 5, four specific groups on the priority list will be prioritized before the other groups in Phase 1c.

As COVID-19 cases and hospitalizations rise yet again, Philadelphia's health commissioner is urging city residents over the age of 65 to get vaccinated as soon as possible.

The Health Department has asked vaccine providers, including pharmacies, to allow these prioritized groups to set appointments. These first four groups are:

According to officials, other groups prioritized in Phase 1c, including those in higher education, public-facing finance roles, transportation (including airport and train workers, and taxi and rideshare workers), construction, telecommunications and IT, the press, the legal industry, and public health workers will be made eligible later in April.

Philadelphia health officials continue to strongly encourage everyone over the age of 65 to get vaccinated as soon as possible.

The announcement comes one day after Pennsylvania announced an accelerated timeline that allows for all adults to be eligible for a vaccine by April 19.

Earlier this week, President Joe Biden announced that 90% of adults should be eligible to get a coronavirus vaccine within the next three weeks as well as have a vaccination site within five miles of where they live.

Officials say phase 1c could include 250,000 people and many Philadelphians say they are excited about the announcement.

"I'm really excited that everyone is starting to get vaccinated for things to start opening up again," said Gabby White of Rittenhouse.

Lillie Jones of Center City said, "People will be able to go out again and keep each other company."

However, some taxi drivers like Felix Odeniyi feel like his industry should be included with those eligible on Monday.

"Cab drivers should be next. We deal with the public every day," said Odeniyi.

He says, in his cab, there's no way to keep socially distanced.

And given his age, Odeniyi adds that he'd like to have the vaccine sooner rather than later.