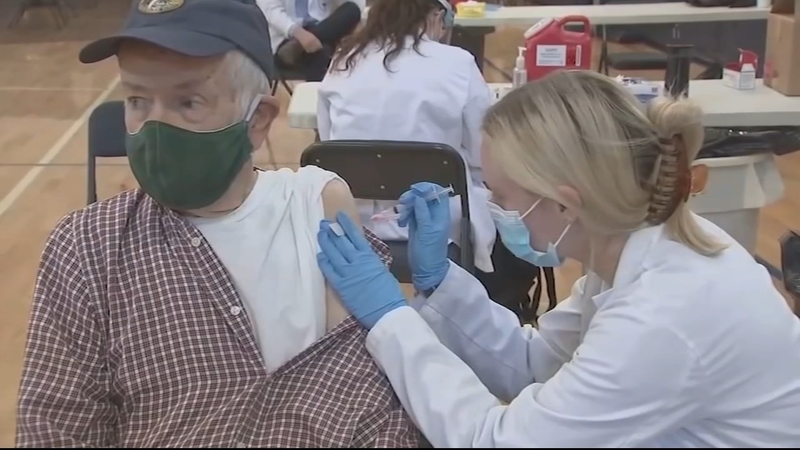 Philly leaders urge residents 65+ to sign up for vaccine

PHILADELPHIA (WPVI) -- Health officials in Philadelphia are urging people 65 and up to sign up for a vaccine appointment before others become eligible within a month.

Vaccine appointment slots in Philadelphia are expected to open up to every adult by May 1 or sooner, according to Philadelphia Health Commissioner Dr. Thomas Farley.

"Right now, I'm very concerned about this particular epidemic wave, so I want to make sure that the people over the age of 65 who are the most likely to die; 81% of our deaths are in people over 65," Farley said.

As COVID-19 cases and hospitalizations rise yet again, Philadelphia's health commissioner is urging city residents over the age of 65 to get vaccinated as soon as possible.

Temple University is trying to help fill a need by making an empty dorm available.

A vaccination clinic is opening Wednesday at the James White Residence Hall on N. Broad Street for eligible students, teachers and staff who live in the city; and then on Thursday, it will be open for city residents with appointments who meet requirements for phases 1A and 1B.

Dr. Farley said the number of daily positive cases has nearly doubled in the past month.

Hospitalizations are also rising; earlier this month, the city hit a low of just over 200 people hospitalized for COVID-19, but just this week, the number of people in the hospital has more than doubled to roughly 429.
While Philadelphia is in phase 1B, vaccinating people such as grocery store and postal workers, the rest of Pennsylvania and the suburbs are still in 1A, which includes mainly health care workers and those at high-risk.

"By the end of April, early May, we should be at a point where we should have enough vaccine come through the system to satisfy everybody who at least wants the first vaccine," Wolf said.

SEE ALSO: Still unclear when Pennsylvania will move out of Phase 1A of vaccine roll-out
EMBED More News Videos

While many other states, including New Jersey and Delaware, are moving into Phase 1B, and even beyond, Pennsylvania remains in 1A.

Wolf said the state hasn't moved out of Phase 1A partly because there's a high population of older people.

The governor also said that that state is two weeks ahead of schedule on efforts to make the vaccine available to teachers and staff of all grade levels.
Report a correction or typo
Related topics:
health & fitnessphiladelphiacovid 19 vaccinesenior citizens
Copyright © 2021 WPVI-TV. All Rights Reserved.
COVID-19 VACCINE