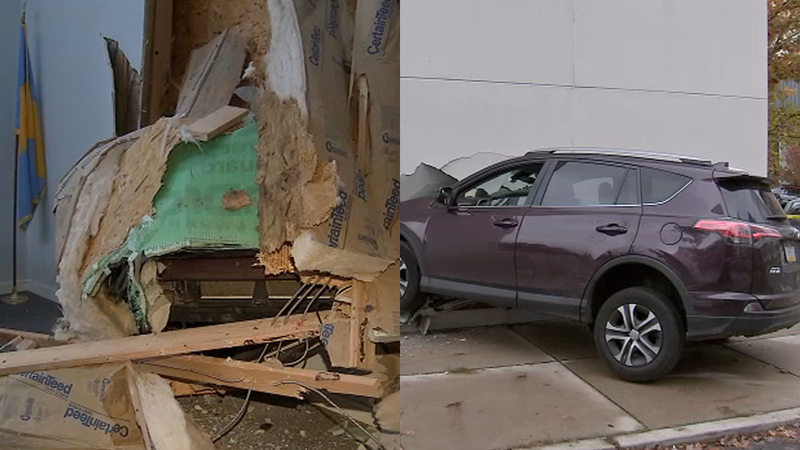 PHILADELPHIA (WPVI) -- An SUV crashed into the side of the Philadelphia Democratic City Committee building on Wednesday night in the city's Spring Garden section.

Former Congressman Bob Brady who is chairman of the Democratic City Committee was in the building with staff members.

They know politics can get heated from time to time so they didn't know what to think when a car came crashing through their conference room.

The good news is it had nothing to do with politics; the bad news is there is considerable damage to the building.

"I was clenching so hard to the steering wheel that I broke three nails," said Laila Kerbag.

Kerbag and her friend Assirem Hosni were traveling southbound on North American Street, crossing the intersection at Green Street, when they were side-swiped near the rear of her car, spinning it out of control.

"It was just that she froze at the time and had her foot on the gas, so she couldn't stop the car in time," said Hosni.

The car then crashed into the side of the Democratic City Committee building where workers were preparing ballots for next week's election.

"It was just a loud noise, we heard 'ba-boom,' we didn't know what happened. The building shook a little bit and we walk out and see a car sitting in our meeting room," said Brady.

Bill Dolbow of the Democratic City Committee had been standing next to the wall seconds before the accident but walked away to answer the door.

"As I was walking to the door, that's when the accident happened. Boom! Where I was standing. I just ran out to get out of the building," said Dolbow.

Kerbag figured she had to act quickly.

"I watch a lot of movies, so I'm thinking it's gonna blow up, so I'm like, 'Get out! Get out of the car!' And we just jumped out of the car and just go on the ground," said Kerbag.

Fortunately, the car didn't explode, and nobody was injured.

In the end, all parties joked around each other. Brady even told the teens, 'They could've knocked' and the asked if they were Republicans?

"What did the Republicans do to us? Ha ha ha. No, it's something that happens. We'll fix it," laughed Brady.

L&I Inspectors will be out to make sure there is no danger of collapse when the car is extracted from the building.
Report a correction or typo
Related topics:
philadelphiademocratspoliticsaccidentcar into buildingcrash
Copyright © 2022 WPVI-TV. All Rights Reserved.
TOP STORIES
Rise in brazen thefts force convenience stores to close
5 people shot in North Philadelphia near Temple University
Delco bus driver accused of taking upskirt photos of students
What is monkeypox? What to know after US confirms 1st 2022 case
Grand jury indicts man in Buffalo supermarket shooting
Newlyweds mark big day with fiery stunt
AccuWeather: From showers to sunshine
Show More
Oz, McCormick locked in tight race. Could a recount be triggered?
1st monkeypox case in US this year reported in Massachusetts
Biden invokes Defense Production Act for formula shortage
Red Cross registers hundreds of Ukrainian POWs from Mariupol
18-year-old dies after being trapped under sand at Jersey Shore
More TOP STORIES News