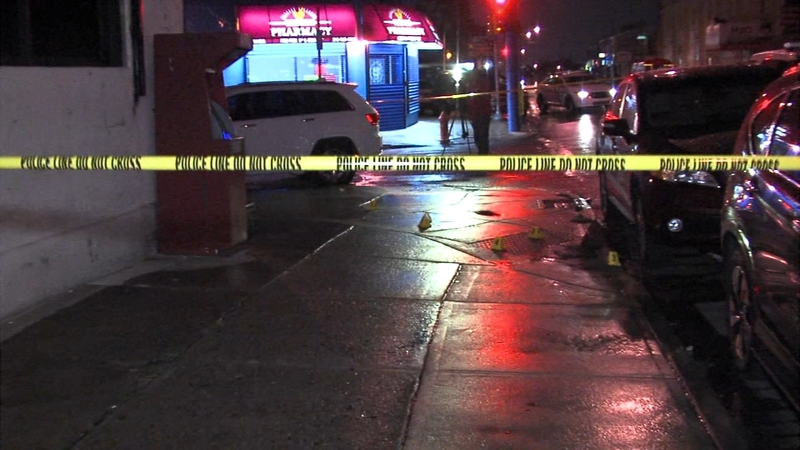 FELTONVILLE (WPVI) -- Police are investigating a shooting outside a Philadelphia bar that's left two men fighting for their lives.

The Action Cam was on the scene on the 4800 block of Front Street in the city's Feltonville section around 1:45 a.m. Saturday.

You'll also notice he's continuously looking back at someone across the road, standing on the corner just outside of a local bar.

Another camera angle shows the man deciding to walk across the street and back towards the soon to be victim.

Seconds later from the first camera angle, we see the suspect come back into frame creeping behind the corner.

Then according to police, he attempts to rob the 27-year -old victim.

You can see a struggle ensue in the video.

Police say during that struggle the 27-year-old was critically wounded when the suspects gun fired.

We spoke with a woman who saw it happen from across the street.

She says it was so close she thought her house was going to be hit.

"Yeah, really crazy and I'm crazy so I bent down below the front door," she continued.

Now immediately after the victim was shot out here, someone from inside the bar ran out. That person had a license to carry and they shot the robbery suspect.

"And then the guy, I don't know who he was, he was standing over somebody laying on the ground and he had a gun going like this, yelling at people to get back in," she said.

It turns out police say the man who intervened was a security guard with the bar, and he shot the suspect.

You can see from the evidence markers that several shots were fired.

Next, from the surveillance across the street, we see the bar clear out and EMS rush in to take both the would-be robber and victim to Einstein Medical Center.

Detectives say there are no plans to charge the security guard who intervened.