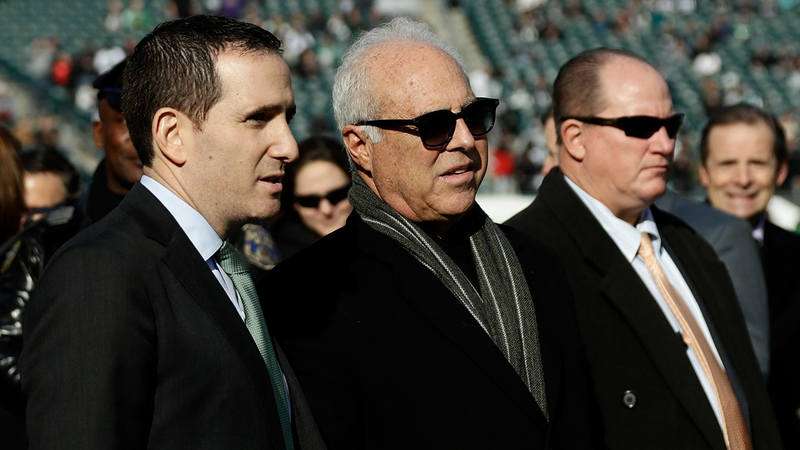 PHILADELPHIA (WPVI) -- When the Eagles hired Doug Pederson five years ago, they only conducted 5 interviews over 17 days...

This time? At least 10 candidates in the first nine days of the search; that's called efficiency.

You have to wonder what they're actually looking for.

When Jeffrey Lurie fired Chip Kelly, he made a big deal about finding a coach with emotional intelligence.

He had that in Pederson; the players LOVED him.

But maybe he's thinking he swayed too much that way?

Which makes it sound to me that he wants someone who takes a bit more of a stand.

What makes that interesting is that from the sound of it, Pederson became fed up with being told what to do.

Will Lurie and Howie Roseman be able to relinquish control to whomever it is they decide to hire?

Also interesting is the fact that they've interviewed a lot of defensive candidates - they haven't gone that way in a VERY long time.. maybe again pointing to the fact that this time they are looking for more of a CEO type - in the John Harbuah and Mike Tomlin style.

That said, I still see them hiring an offensive guy... someone who they think can start fresh with Carson Wentz.

Someone who has a bit more of an edge than Pederson but less of an edge than Chip Kelly.
Report a correction or typo
Related topics:
sportsphiladelphiaaction news sportssports flashphiladelphia eagles
Copyright © 2021 WPVI-TV. All Rights Reserved.
SPORTS FLASH
Eagles playing catchup after Smith injury, Hurts' inexperience
Hurts, Sirianni have plenty to prove at Eagles camp
The NL East is up for grabs! It's time for the Phillies to pounce
Could the 76ers really trade Ben Simmons?
TOP STORIES
Wawa among retailers requiring masks for employees
Pa. girl injured in suspected shark attack in Ocean City, Maryland
Fire destroys cabin of man forced out of woods, jailed
PSU student dies after months-long battle with COVID
New report reveals stunning details about July 29 tornado outbreak
Moderna COVID-19 vaccine remains 93% effective for up to 6 months
US plans to require COVID-19 vaccines for foreign travelers
Show More
Delta cases continue to rise, hospitalizations climb: CDC
Carli Lloyd gets standing ovation at Olympics, US wins bronze
Vehicle rolls over on its roof in Southwest Philly crash
Cole Hamels returning to MLB but not with Phillies
Target to offer debt-free college degrees to 340,000 US employees
More TOP STORIES News