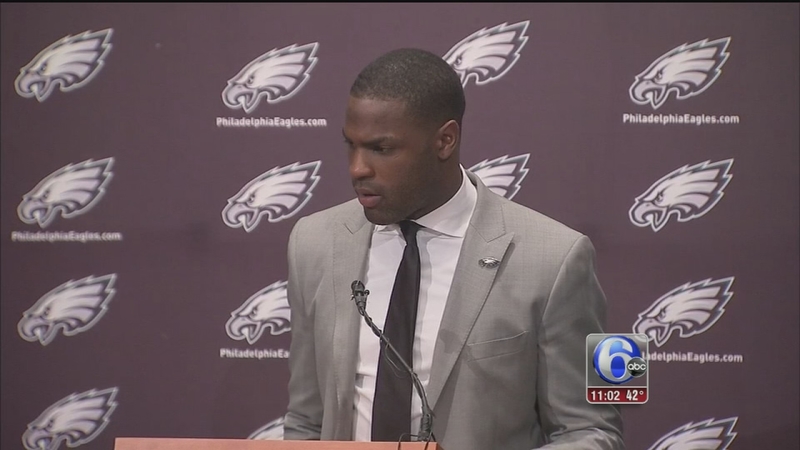 PHILADELPHIA (WPVI) -- The Philadelphia Eagles have agreed to terms on a five-year contract with running back DeMarco Murray.

An NFL sources tells Action News the deal is worth $42 million, with $21 million guaranteed.

"I felt this was a great opportunity for me to win a Super Bowl," Murray said in a Thursday night press conference.

"Sam's a great fiend of me, like a brother to me...it was a huge influence once I heard that he was getting traded here. He immediately texted me and told me to jump on board, let's go win it. I'm excited to get back with him, he's a close friend of mine, and I'm excited to play with him again him," Murray said.

In reference Dallas Cowboys fans burning his jersey, Murray said he hadn't heard about those reports.

"I'm sure their feelings are hurt and I apologize for that. I'm ready to move on and glad to be part of this organization," Murray said.

The former Cowboy arrived in Philadelphia Thursday afternoon to meet with Eagles officials.

DeMarco Murray Has landed in Philadelphia to meet with Eagles. Expected to sign 5 year deal pic.twitter.com/eLWtKHqChw

Looks like DeMarco Murray was handed an Eagles hat after landing in Philly. Murray & Eagles have verbal agreement pic.twitter.com/wrqPqNVjTg

Murray made his way to the NovaCare Complex to speak with Eagles head coach Chip Kelly. Kelly, actually, canceled a scheduled trip to watch quarterback Marcus Mariota work out in Oregon.

Murray was named the 2014 AP Offensive Player of the Year after rushing for an NFL-best and career-high 1,845 yards and 13 touchdowns.

Originally a third-round draft choice of Dallas in the 2011 NFL Draft, Murray, 27, appeared in 53 games during his four years with the Cowboys, totaling 4,526 yards and 28 touchdowns on 934 carries.

Murray is a two-time Pro Bowler.

Jerry Jones, the owner of the Dallas Cowboys, released the following statement on Murray signing with the Eagles:

We are very grateful to DeMarco Murray for his contributions to the Dallas Cowboys. He is a quality person, a very good football player, and a player that we wanted to keep.

We have great appreciation for his skills, and if there was no salary cap in place, DeMarco would be a Cowboy. This came down to an allocation of dollars within the management of the salary cap.

Obviously there is emotion involved in these decisions, but it is critical that there be must be discipline involved as well. If it were a question of having an open checkbook with no salary cap constraints, we all know things would have worked out differently.

We have recently made significant commitments to top players who are currently on the team, specifically at key positions such as quarterback, left tackle and wide receiver, and we were comfortable with the offer that we made to DeMarco to include him in that structure.

At the end of the day, this is about finding the best way to collectively fit all of the individual pieces together, in terms of talent, offensive players, defensive players and dollars-under the salary cap structure-that gives you the best chance to have a championship team.

Also on Thursday, the Eagles officially agreed to terms on a 3-year contract with running back Ryan Mathews.