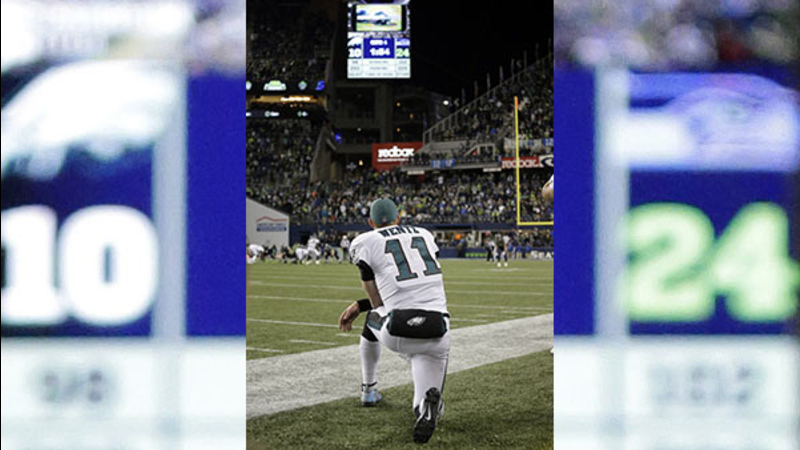 SEATTLE -- Russell Wilson threw three touchdown passes, the last a 15-yard strike to J.D. McKissic with 7:29 left, and the Seattle Seahawks stayed in the NFC playoff hunt with a 24-10 victory over the Philadelphia Eagles on Sunday night.

Seattle (8-4) snapped Philadelphia's nine-game winning streak thanks largely to another masterful performance by its quarterback. Wilson was 20 of 31 for 227 and threw touchdowns of 11 yards to Jimmy Graham, 1-yard to Tyler Lockett and the TD to McKissic after the Eagles had trimmed the lead to seven.

"I thought Russell was phenomenal tonight. I thought that was Russell showing you everything he's all about," Seattle coach Pete Carroll said. "From start to finish, from the first play of the game he was on it. He created. His execution was excellent."

Philadelphia (10-2) was the highest-scoring team in the NFL averaging 31.9 points per game. But the Eagles got just 10 points out of seven drives that at some point reached Seattle territory.

Torrey Smith says #Eagles “beat ourselves” & “glad it happened now” because Eagles can learn and bounce back pic.twitter.com/gDnQPz6PJB

Carson Wentz was 29 of 45 for 348 yards with one touchdown and one interception. Wentz had a costly fumble at the Seattle 1 on the opening drive of the second half that could have pulled the Eagles even at 10-all.

Wentz was inches shy of breaking the plane when Sheldon Richardson ripped the ball free. The loose ball bounced around the end zone and eventually over the end line for a touchback and Seattle's ball. It was a major turning point as Seattle went 80 yards in 11 plays, capped by Wilson's 1-yard pass to Lockett and a 17-3 Seattle lead. The touchdown was setup by a 47-yard pass to Doug Baldwin on third-and-10 beating a Philadelphia blitz.

"I make my big plays here and there," Richardson said.

Seattle snapped a rare two-game losing streak at home mostly because of Wilson. It wasn't his best game in numbers, but it might be one of his best performances. He came up with key throws when needed, kept plays alive with his legs and pulled out some unexpected improvisation just went the Seahawks needed it.

Wentz started a Philadelphia rally on the first play of the fourth quarter. Facing third-and-13 at the 16, Wentz was pressured from the pocket. As he was about to be dragged down by Quinton Jefferson, Wentz hit Nelson Agholor for 51 yards. Four plays later, and again facing third-and-long, Agholor beat Maxwell again and Wentz found him for a 27-yard TD to pull the Eagles within 17-10.

Agholor had seven catches for 141 yards.

That's when Wilson pulled out a little more magic on what proved to be Seattle's decisive drive. Facing third-and-8 at the Philadelphia 42, Wilson was forced to scramble. Six yards downfield and short of the first down, Wilson lateraled the ball to Mike Davis as he was about to be hit. Davis took the lateral another 17 yards for a first down. It was a borderline play that appeared close to a forward pass but Philadelphia didn't challenge.

After another remarkable Wilson throw across his body to Nick Vannett for 21 yards, Wilson hit McKissic for a 15-yard score with 7:29 left and a 14-point Seattle lead.

"We had a good game plan going against (Wilson)," Philadelphia safety Corey Graham said. "But as you see, you know how it is, better in person than it is on film."

Graham had just three catches for 26 yards but continued to be Wilson's favorite target near the goal line. Graham has touchdowns in four straight games and nine in the past seven games.

Philadelphia tight end Zach Ertz left in the third quarter to be evaluated for a head injury and did not return. Ertz was injured trying to make a difficult catch across the middle that was broken up by Bradley McDougald.

Eagles: At the Los Angeles Rams on Sunday.

Seahawks: At Jacksonville on Sunday.