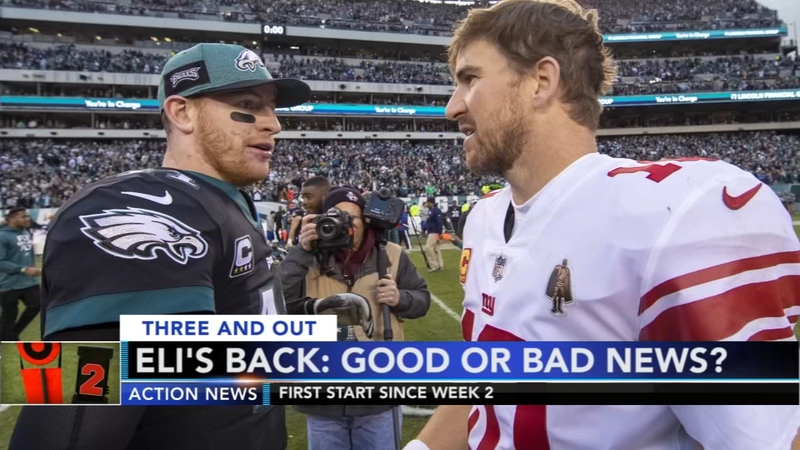 PHILADELPHIA (WPVI) -- The Philadelphia Eagles are heavy favorites going into Monday night's game against the New York Giants, which will air at 8 p.m. on 6abc.

The Birds can control their own destiny by winning out the rest of their games to make the playoffs, but it starts Monday night at Lincoln Financial Field.

Players say the key will be wanting it more than their opponents for the rest of the season by bringing more energy when they hit the field.

That opponent, the Giants will be led by Eli Manning, who will be returning to the team tonight.

But the Eagles also keeping an eye on the Cowboys. The Birds are looking to pull even with Dallas in the division after the Cowboys suffered their third straight loss Thursday night.

Ajay and Mike Quick - At Tredici

A big part of Eagles being successful will be team leadership stepping up.

Eagles defensive tackle Fletcher Cox is confident they can snap out of this three-game losing streak with only a month to go.

The Giants have not won a game at the Linc in six years.

When mom started chanting "Die Eagles die" as reported by Beccah Hendrickson during Action News at 5 on October 3, 2019.