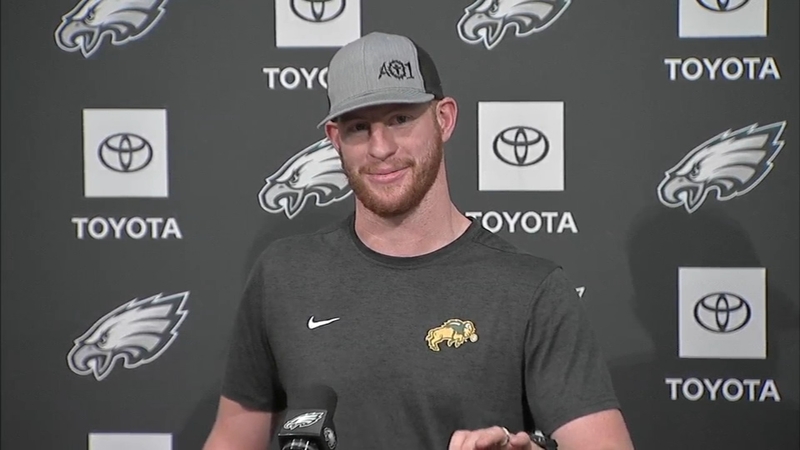 PHILADELPHIA (WPVI) -- "Electric!" It's the word both Eagles QB Carson Wentz and Head Coach Doug Pederson used to describe their excitement level for the opener on Sunday against the Washington Redskins.
"It's going to be electric. Running out of the tunnel. The fans will be revved up and excited. So will the guys," said Wentz

"It's electric," said Pederson on what he thinks the Linc will be like Sunday at 1 p.m.

"I mentioned the other day it's a little bit like a playoff-type atmosphere, that first game. Emotions are running high, adrenaline is running high for players and coaches. It's the excitement. It's a new year. We're finally here. Football is back," Pederson added.

Wentz and the Eagles are hoping the new-look offense will be 'electric,' as well as Wentz, who has only had practices to get the timing and rhythm down with DeSean Jackson, Jordan Howard and the other newcomers to the Eagles.

Wentz says he feels "more than ready" despite not playing a single preseason snap.

Pederson says his message to Wentz is the same to everyone else, which is don't feel like you need to do everything yourself.
"I don't think you ease anybody in. I think you have to go in fully prepared, that's why we practice. It's why you've gone through a grueling training camp, especially at that position and for Carson" Pederson says. "So, I don't necessarily believe in easing anybody in. I think that's how you have a little passive mindset, especially as a play-caller. That's not who I am and that's not who he is. So, don't foresee that."

Wentz said he's excited to air it out to Jackson, a former Redskin, and knows the City of Philadelphia is just as excited to see his return.

Now with more weapons and a more explosive offense, the Eagles look to eliminate their slow starts that haunted them last year.

Pederson says that he possibly has to change the way he calls plays early on. Pederson has suggested the idea of calling quicker plays to get Wentz comfortable and into a rhythm early before taking bigger risks.