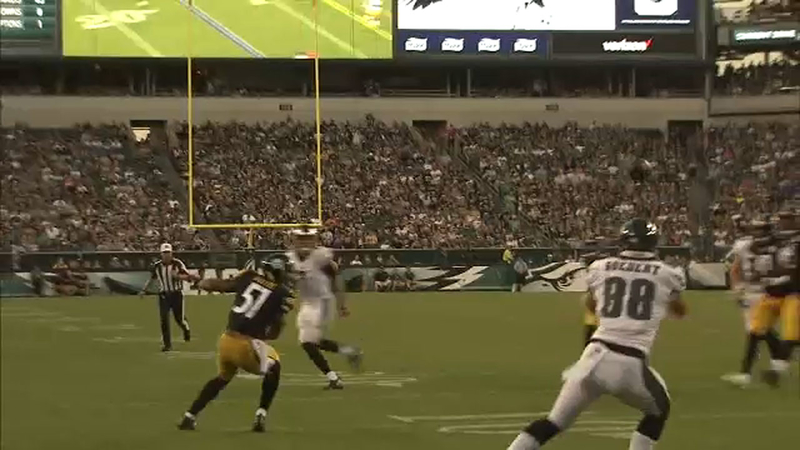 PHILADELPHIA -- Malcolm Jenkins went back to raising his fist during the national anthem and Chris Long again put his arm around him as the teammates continue trying to raise awareness about racial inequality, social injustices and systematic oppression.

Landry Jones and Josh Dobbs each tossed touchdown passes and the Pittsburgh Steelers beat the Philadelphia Eagles 31-14 Thursday night in the preseason opener.

But Jenkins' decision to resume his demonstration after stopping last December drew most of the attention as the defending Super Bowl champions returned to the field.

"Everybody is waiting for what the league is going to do," Jenkins said. "We won't let it stop what we stand for. I was very encouraged last year with the direction and that obviously took a different turn.

"I think it's important to utilize the platform as we can because for whatever reason, we have framed this demonstration in a negative light and often players have to defend why we feel the need to fight for everyday Americans and in actuality we're doing the right thing."

The league and the players' union have yet to announce a policy for this season regarding demonstrations during the anthem after the league initially ordered everyone to stand on the sideline when "The Star-Spangled Banner" is played, or remain in the locker room.

Cornerback De'Vante Bausby also raised his fist during the anthem, and defensive end Michael Bennett walked out of the tunnel and walked toward the bench while it played. It appeared all the Steelers stood.

"Malcolm is always a guy who is doing the work in the community, backing up whatever he's doing," Long said.

Jones completed all four of his passes for 83 yards, including a 71-yard TD pass to JuJu Smith-Schuster in the first quarter. Smith-Schuster made a leaping catch over Rasul Douglas at the 33 and ran untouched to the end zone.

Fitzgerald Toussaint had a 3-yard TD run and a 2-point conversion to give Pittsburgh a 15-8 lead. Dobbs threw a 29-yard TD pass to Damoun Patterson late in the second quarter.

"We moved the ball successfully," Dobbs said. "It felt good to be out there."

Sudfeld threw a perfect strike for a 63-yard TD to Shelton Gibson and fired a 15-yard TD pass to rookie Dallas Goedert. He finished 10 of 14 for 140 yards.

"I just ran my route and when I looked back, Nate stepped up and scrambled to my side and was able to hit me," Goedert said. "A great play by him."

Wentz still hasn't been cleared for contact after having surgery to repair two torn ligaments in his left knee last December. Foles, the Super Bowl MVP, has missed a few practices with muscle spasms in his neck and shoulder.

Mason Rudolph, a third-round pick competing with Jones and Dobbs for the backup job to Roethlisberger, was 7 of 12 for 101 yards.

"He did a solid job in all areas," Steelers coach Mike Tomlin said.

Eagles: Goedert, a second-round pick and the team's first selection, had four catches for 66 yards and one TD. He'll get plenty of opportunities as the second tight end.

Ryan Shazier joined the defense in Pittsburgh's pregame huddle, just 11 months after spinal stabilization surgery. Shazier is out for the season.

Eagles rookie Jordan Mailata, an Australian rugby player drafted in the seventh round, got beat for a strip sack on his first series in the NFL. Mailata began the second half at left tackle.