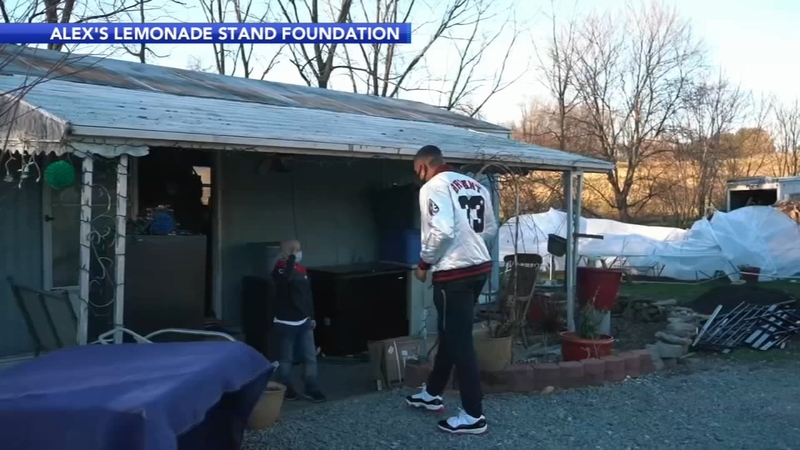 Liz Scott, the mom of founder Alex Scott and Co-Executive Director of ALSF, said Hurts reached out to the organization to see if there was a way he could get involved to make a difference.

"We were able to connect him to a family. He wanted to make their Christmas wishes come true," Scott said in a video the organization posted to social media on Wednesday.

ALSF introduced Hurts to a family in Nottingham. Seven-year-old Erick, the oldest of five children, has been diagnosed with cancer.

"I'm really blessed to do this," Hurts said.

During his conversations with the family, he learned they were living in a two-bedroom trailer.

"I know they've experienced a lot of adversity. They've had to deal with a lot of different things, but one thing I like to do is be encouraging at all times, uplift those around me," Hurts said. "I just want to make an impact in the city of Philadelphia, in this area."

Hurts, wearing a Kobe Bryant Lower Merion jacket, met with Erick who told him he was making something for the football star. The boy handed Hurts a drawing.

Hurts told the 7-year-old that he would fit right in at an Eagles practice because his teammates like people who are strong and courageous like Erick.

The two then played catch outside.

Hurts then grabbed an oversized check and presented it to the family.

"I'm sending you nothing but love and blessings. Hearing your story, hearing Erick's story, it touched me, and I wanted to do my part," Hurts said.

The $30,000 check was for Erick's mother Amanda to use toward a new home for the family.

"I think what amazes me is how the kids don't even realize the circumstances they're in, but they're just happy to be living," Hurts said.

Before he left, Hurts signed Erick's jersey and said he was going to hang the boy's drawing up in his locker.