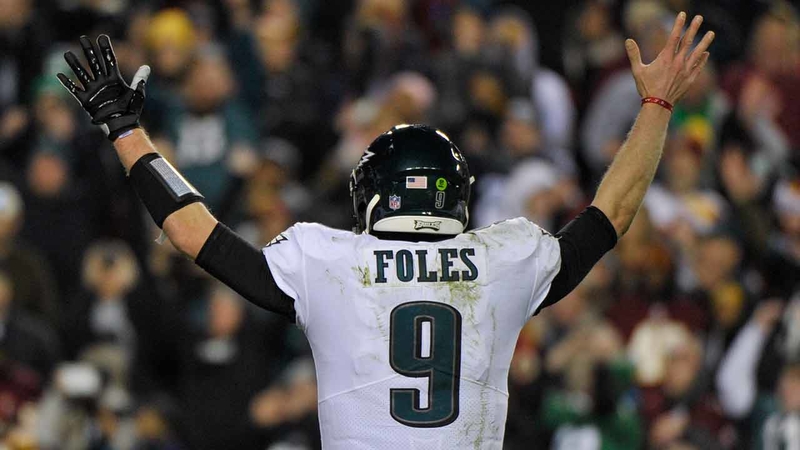 LANDOVER, Md. -- Nick Foles' magic stretched all the way back to Minnesota.

Foles did it again, leading the Philadelphia Eagles to a 24-0 victory over the Redskins and the defending Super Bowl champions earned the NFC's final wild-card berth when Chicago beat the Vikings on Sunday.

Foles tied Philip Rivers' NFL record by completing 25 straight passes and threw two touchdown passes before a chest injury forced him out of the game. Nate Sudfeld fired a 22-yard TD on his only pass.

It felt like a home game for the Eagles. Philadelphia fans filled FedEx Field, sang "Fly! Eagles! Fly!" and chanted "Let's Go Bears!" There were several thousand empty seats and Redskins fans could only cheer for the Vikings to spite Eagles fans.

Foles, the Super Bowl MVP in Philadelphia's win over New England last February, is 6-0 in must-win games filling in for Carson Wentz.

Foles stepped in after Wentz was sidelined by a back injury earlier this month and guided Philadelphia to an upset on the road against the Rams as a 13 1/2-point underdog. He set a franchise record for yards passing in a game with 471 in a 32-30 comeback win last week against Houston.

The Eagles dominated the Redskins, controlling the ball for 43:19. Philadelphia's defense held Washington to only 89 yards total offense.

He tossed a 2-yard pass to Alshon Jeffery to cap a 19-play, 87-yard drive that took 11:49 in the second quarter, giving Philadelphia a 10-0 lead. Foles was 10 of 10 on the drive and the Eagles converted three times on third downs and once on fourth-and-1.

Foles connected with Nelson Agholor on a 6-yard pass to make it 17-0 late in the third quarter. On the previous play, Foles had a chance to break the completion record but misfired on a pass to Agholor.

Sudfeld hit Agholor on a catch-and-run TD to extend the lead to 24-0 in the fourth.

Josh Johnson, making his third start for the Redskins after Alex Smith and Colt McCoy sustained season-ending injuries and Mark Sanchez was ineffective, was 12 of 27 for 91 yards and one pick.

Rasul Douglas intercepted Johnson on the first play from scrimmage.

The nearly 12-minute drive by Philadelphia was the longest in the NFL since the Browns had a field-goal drive that lasted 12:01 against the Chiefs in 2015. The 19 plays were the most in a drive against Washington since 1999.

Redskins punter Tress Way threw a 7-yard pass to Jehu Chesson on a fake punt on fourth-and-2, but Johnson followed with three straight incomplete passes and Way had to punt.

Eagles: Foles left in the fourth quarter with a chest injury.

Redskins: Finished third in NFC East and missed the playoffs for the third straight season.