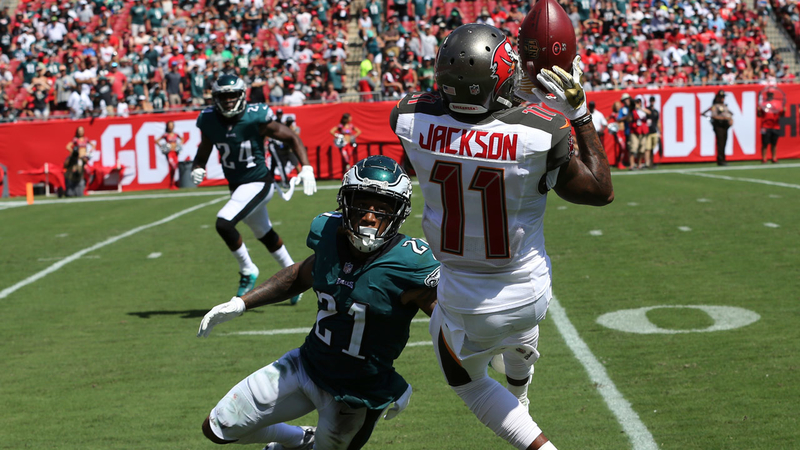 "A lot of self-inflicted wounds," the coach said Sunday after the reigning Super Bowl champions stumbled to a slow start in the blistering Florida sun and never fully recovered in a 27-21 loss to the surprising Tampa Bay Buccaneers.

Game-time temperature was 91 degrees, with a heat index of 105.

A usually reliable defense gave up a 75-yard TD reception to ex-Eagle DeSean Jackson on the first play of the game and another 75-yarder to O.J. Howard before halftime. But Philadelphia's sputtering offense was partly to blame for the loss, too.

In addition to losing a pair fumbles and being stopped on downs twice, the Eagles hurt themselves with ill-timed penalties. That kept an injury-depleted offense missing some its top playmakers from getting into a rhythm early.

"Anytime you are down a couple of guys, it affects you offensively. ... The thing was, we kept going backward in the whole first half. Either from penalties or lost yardage on first down, we were playing from behind a lot," Pederson said. "The injuries hurt, but again, it's self-inflicted."

The Eagles (1-1) won their season opener over Atlanta with Nick Foles throwing for just 117 yards. The Super Bowl MVP was 35 of 48 for 334 yards, one touchdown and zero interceptions against the Bucs.

But by the time the Eagles started to move the ball with some consistency, Philadelphia trailed 27-7.

"I think the big thing is we can't shoot ourselves in the foot with penalties," Foles said.

"Looking back, we'll look at the film and grow, but I think the thing I will take from this game is how hard our team fought," Foles added. "Tampa Bay played a tremendous game. ... We never once turned on one another, we never put our heads down, we kept our heads up, we kept fighting."

Two of Philadelphia's best playmakers Alshon Jeffery and Darren Sproles were inactive. Running back Jay Ajayi, receiver Mike Wallace and left tackle Jason Peters were lost for portions of the game after being injured in the first half Sunday.

"Guys step up all the time, and that's what we did," Foles said. "We gave ourselves an opportunity to win this game. Obviously, we want everyone healthy, but that's not really the case sometimes."

Nelson Agholor finished with eight catches for 88 yards, including a 2-yard TD that cut Philadelphia's deficit to six points with 2:45 remaining. But it wasn't enough to escape the large hole that the defense helped create by giving up the long TDs to Jackson and Howard.

"You take those plays out, it's a totally different game," Eagles safety Malcolm Jenkins said. "And, that's completely on us."